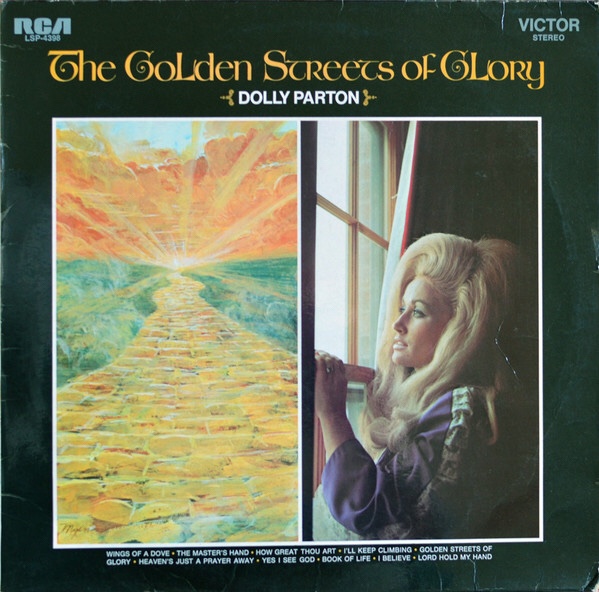 Dolly Parton’s mother always told her that if she hadn’t become a country singer she would have been a preacher, and if you’ve ever seen Dolly live you know that her concerts have the feel of mass evangelical rallies, such is the worship she generates from her audience. Dolly’s relationship with religion goes back to her upbringing and her family’s strong ties to the Pentecostal church. Her grandfather Jake was a preacher and many of her relatives followed in his footsteps. Dolly’s mother read the bible to her every night and this faith is woven into the textures of her songwriting. In 1971 Dolly released her sixth album and first gospel collection, The Golden Streets of Glory featuring a mix of standards, spirituals and songs written by herself and other family members.

The album opens with I Believe, which was a song commissioned by singer Jane Froman in the 1950s for her television show, written by her band members Ervin Drake, Irvin Graham, Jimmy Shirl and Al Stillman. The song was an instant hit (you can hear the original performance on YouTube). Other versions were released by Frankie Lane, Elvis Presley and unfortunately even those British TV stars Robson and Jerome who made it a UK number one in the 90s. Forman was known for her contralto vocals and this song is often covered by men. Dolly starts the song in her lowest register but it’s when she lets loose on the chorus that her distinctive vocal style really makes the song her own. Adding the gospel choir and orchestral arrangement only adds to the power of the song.

Yes, I See God was written by her aunt Dorothy Jo Hope, who had cowritten Dolly and Porter’s hit song Daddy Was An Old Time Preacher Man. Dorothy helped teach Dolly guitar and was also an evangelical preacher but her talent as a songwriter shows the strength of the musical genes in Dolly’s family. This sweet country ballad tells of how she sees god’s grace and presence everywhere in the world.

My Master’s Hand is one of the three original songs that Dolly wrote which feature on this album. It has a more natural upbeat pop feel to the medley and arrangement, similar to her secular releases at this time. The lyrics reference religious stories including Noah and the Hebrew children who were thrown into the fiery furnace. These stories that Dolly heard as a child obviously left a lasting impression and influenced her storytelling skills.

Heaven’s Just a Prayer Away was originally recorded by Norma Jean in 1967 and written by Tommy Tomlinson. The arrangement is quite sixties in style with some nice organ included. Dolly sings this at the top of her range and it’s an uplifting celebration of her faith.

The highlight of the album is the title track Golden Streets of Glory, the second solo write on here. The song starts with the hymnal sound of Dolly singing ‘glory to his name’ before a jaunty country pop sound starts and she tells us the story of her life and faith. When the song slows down again and the choir sings ‘oh holy, holy’ it really is a spiritual experience. She sings ‘I just hope my feet are clean enough to walk upon the golden streets of glory.’ And hey if Dolly can’t get into heaven then the rest of us don’t stand a chance.

How Great Thou Art is one of the most popular hymns of all time, having been adapted by Stewart K Kline and popularised on the Billy Graham Crusades. Dolly’s version is a real showstopper, with a classic theatrical quality to the arrangement. Her voice has rarely sounded this powerful.

I’ll Keep Climbing starts with a more straightforward country arrangement before reaching the uplifting gospel chorus. The contrast between the two parts of the song underline the importance of faith to get people through tough times. This one was also written by her aunt and the melody is echoed on Dolly’s recent song Blue Smoke.

Book of Life was written by her grandfather Jake Robert Owens (whose songs were also recorded by Kitty Wells) and is another joyful celebration of faith. Here you must repent your sins to get in the book of life and enter the kingdom of heaven. Wings of a Dove was written by Dolly’s longtime record ‘producer’ Bob Ferguson (Porter actually produced all of Dolly’s records at this point, even if he was uncredited). This song had been a number one hit on the country charts in the early sixties, and also gained considerable success on the pop charts. Dolly would record another version of the song with Loretta and Tammy on their album Honky Tonk Angels.

The final track Lord Hold My Hand was written by Dolly and her mother in law Ginny Dean. Now that’s quite unusual in itself and shows how Dolly’s faith bonded all sides of her family together. Thematically it’s similar to ‘My Master’s Hand’ with its plea to her maker for help and guidance through life.

Musically this album is not too far from Dolly’s other songs in style, with the added bonus of the strings and gospel choir. Collections like these are, by their nature, repetitive in theme but there are some quality songs within worth listening to. At this point in her career Dolly obviously wasn’t afraid to release music that spoke to who she was and how she’d been raised rather than just searching for the next obvious country hit. In the end this album reached number 22 on the charts and she was nominated for Best Sacred Performance at the Grammys (losing to Charley Pride).

So promoting her religious faith was a savvy move that helped to build her brand as a good person, in contrast to the ‘dumb blonde’ assumptions that many people made based on her appearance. This would have especially appealed to southern conservative audiences that enjoyed country music.

In an interview with NPR Dolly was asked for advice for others who live in extreme poverty and she responded, ‘Well, you’ve got to keep your faith, first of all. I pray every day, I always have. I always believed that God would provide.’ Her excellent book ‘Dream More’ explores her faith in more detail and how it helped her to succeed in her life and her career. And yet what’s really interesting to me is reading some of her interviews in the seventies, when she actually declared ‘I am not a Christian’ and said she enjoying ‘being bad’ too much to really embrace religion. These complex, and sometimes contradictory, aspects of her personality make her an intriguing mystery to fans like myself.

The question of her faith introduced by The Golden Streets of Glory would recur throughout her music career. Dolly was inducted to the Gospel Music Hall of Fame in 2009 in honour of the contributions she has made to the genre.