A restored church on a Sunday was a fitting place for country music fans to congregate and worship a woman who is blessed with one of the best voices in the genre. Ashley Monroe returned to these shores for the first time since Country to Country in 2016 and the Scottish crowd were so eager to hear her play again that she sold out both the first venue she was booked to play and this upgrade of St Luke’s as well.

Supporting Ashley was the double bill of songwriters Sean McConnell and Andrew Combs. McConnell joked that despite all three living in Nashville they had to come to Scotland to hang out. He sang a short set of heartfelt country songs, accompanied by acoustic guitar and harmonica. The highlight was a tribute to his father – the title track of his soon to be released album ‘Second Hand Smoke’. For his final song he stepped forward to play entirely unplugged, letting the acoustics of the venue send his voice skywards and impressing the crowd, whom he called a ‘dream’.

It was my second night in a row seeing Andrew Combs and he again performed a warm and engaging set, with the help of his guitarist Charlie Whitten. Combs credited his wife and child for inspiring his music, including the beautiful Like a Feather and his ‘tree hugging hippy song’ Dirty Rain, a stark warning about global warming. Despite his polished vintage sound there was a sense of unease in his work, most notably heard in the final track ‘Hazel’ – a creepy song about stalking, aided by some atmospheric whistling from Whitten.

Taking the stage in a long black dress with flashes of hidden technicolour, Ashley Monroe told the crowd she was ‘humbled’ and ‘grateful’ to be back to a country which ‘inspires’ her and ‘feels like home’. She opened her set with a trio of songs from her recent album ‘Sparrow’, admitting she was relishing playing them live after returning from her maternity leave. Songs like ‘Mother’s Daughter’ and ‘Orphan’ are poignant tales of her family history and they felt even more intimate and personal in this acoustic solo performance. 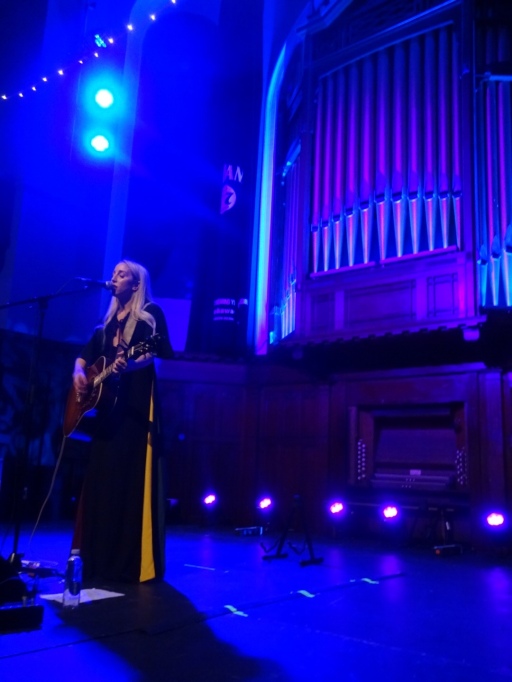 Monroe’s honeyed voice is truly special and none more so than when she sang a pitch perfect knockout version of La Vie En Rose. She then segued into her own autobiographical masterpiece ‘Like A Rose’, with the crowd joining her in a beautiful choir. At the end of the song she was so overwhelmed with the response that she joked about wanting to play it again.

Monroe may admit to not having many upbeat songs but Two Weeks Late had a enjoyably wry humour, and the crowd pleasers ‘Winning Streak’ and ‘Weed Instead of Roses’ were similarly fun.

During the set she played a gorgeous version of ‘Mayflowers’ from her album ‘The Blade’, which had been requested on Twitter, and she also complied when someone then shouted for ‘The Truth’, a song that Jason Aldean made a hit (her only one, she joked). This educated audience knew the deep cuts from her back catalogue and Monroe’s modesty and appreciation for their reception was heartwarming to see.

Monroe is preparing to release an EP of acoustic versions of tracks from the string-laden Sparrow, and this show proved how well songs like Wild Love work in their natural, stripped back form. She finished with a gorgeous cover of Hickory Wind, honouring her hero Gram Parsons and evoking his muse Emmylou Harris in her classy and elegant delivery.

The Celtic Connections crowd certainly got their money’s worth with the quality and quantity of music offered by the evening (although perhaps it would have been nice to see another woman on the bill). In the end though, it was the headline artist who stunned the crowd and proved she is one of Nashville’s most talented, and underrated, stars.