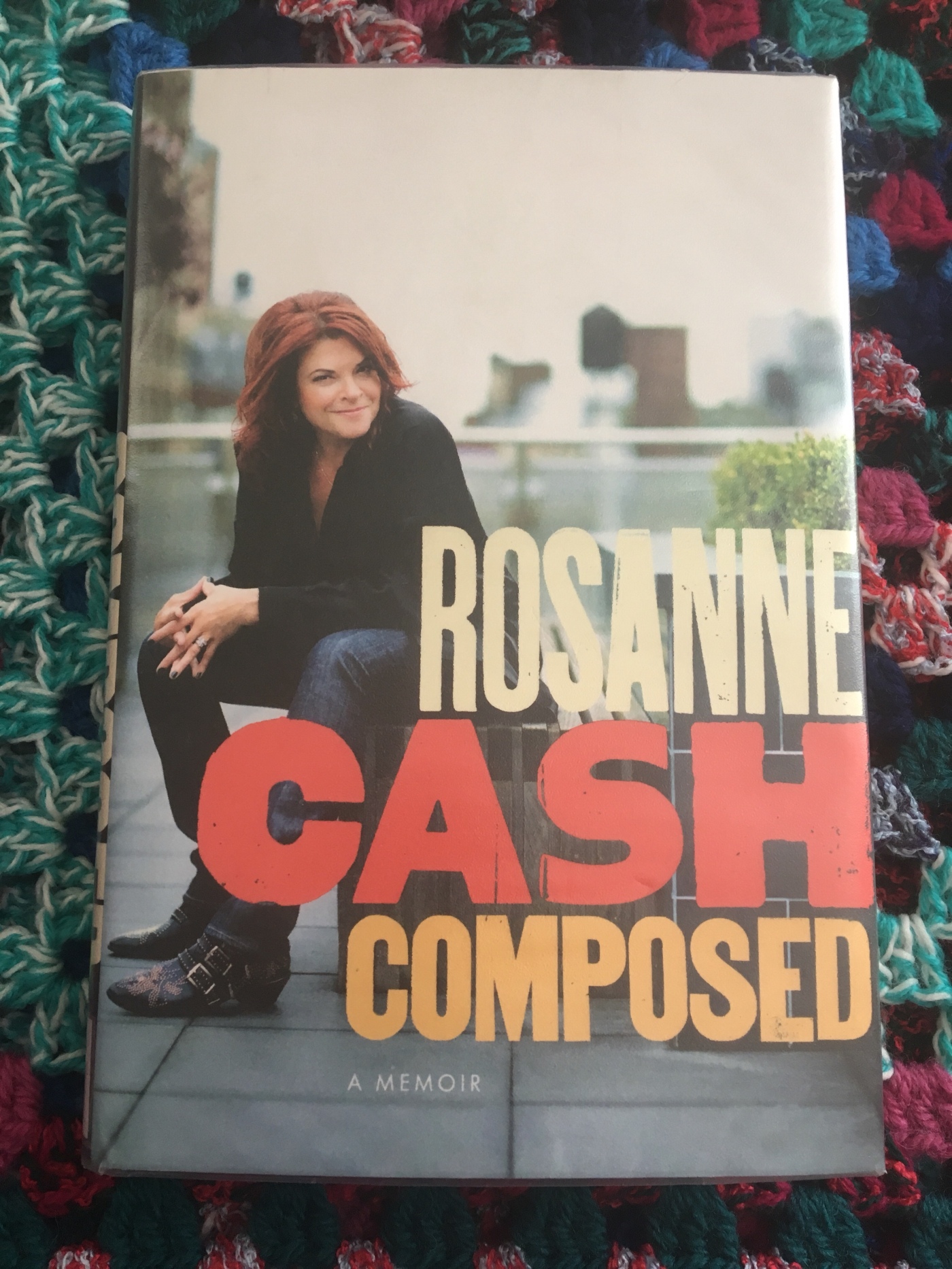 Welcome to the first music book club post! After a dispiriting bookshop visit last month (read more here) I have decided to review a book about music written by a woman every month, starting with ‘Composed’ by Rosanne Cash.

In the beautifully poetic introduction to the book Rosanne Cash gives us an insight into the significance of songs in her life, explaining how her ‘life has been circumscribed by music.’ Reading this book was a deeply immersive experience for me and her hypnotically engaging writing style was a breath of fresh air. Unlike so many artist autobiographies I read which feel like transcribed conversations by ghostwriters, ‘Composed’ conveys her talent as a writer first and foremost.

To be a child of a legend in the public eye is a complex and difficult role to play, and if you read this book to only find out about her famous father then you will be disappointed. This is about her life, and as a child her father was famously absent. What is nice to read in the opening sections is more about her mother, who was so unfairly portrayed in Walk the Line. Still there are also some nice moments when she visits her father for the holidays and discusses how she went on the road with him aged 17. It was on this tour that he gave her the famous list of a hundred essential country songs to know and learn, which sparked her love of music eventually led to her recording some of these songs on her album ‘The List’.

What I found interesting was how Rosanne actively avoided a career as a musician at first, detailing her job working for a record label in London, going to university and attempting to become an actress. You feel she is just fighting the genetic inevitable.

Eventually she embraced her destiny, working with Rodney Crowell on her first demos. Strangely she ended up recording and releasing the album only in Germany before signing to Colombia Records (with a little help from her father). At this point she becomes romantically involved with Crowell and he produces her first record for the new label. Success comes almost instantly, and perhaps is overwhelming especially as she also has her first child during this time. It’s heartening but a little depressing to read about her achievements on the country charts, considering how women are struggling in comparison today.

The highlight of the book for me is the section on recording King’s Record Shop and how a dream about Linda Ronstadt encouraged her to push her creativity further – in songwriting and art. This led to major upheaval in her life – the end of her marriage, her record contract and a move across the country. She then records The Wheel and falls in love with John Leventhal, proving how sometimes fate works in your favour. There is still heartache for her at this time though and one of the most touching moments of the book is reading a letter from her father, sent after she has a miscarriage.

Some of the second half of the book jumps around chronologically but this adds to the quality of the writing for me. It’s impressionistic in the way your brain makes connections between memories across your life – you don’t just think of experiences in linear isolation like so many biographies. What I also really like about the book is some of the insights into music Rosanne has, from her discussion of famous female voices like Patsy, Tammy and Emmylou, to her thoughts on how country music songwriting has become sadly one dimensional over time ‘Modern country music speaks less of such desperate loss and has become shiny and rich and rather shallow as a result.’

Loss itself is a central theme, as Rosanne details the pain of losing her parents and other close family members within a short period of time. She includes the funeral eulogies she wrote for her father and June, which are deeply moving moments in the book. I wept reading them and admire her for sharing such personal moments from her family history with the world. As she writes ‘Loss is the great unifier, the terrible club to which we all eventually belong.’ Such deep truths are woven throughout this wonderful memoir.

Before reading ‘Composed’ I had not listened much to Rosanne’s music and so I made a playlist on Spotify of many of the songs she discusses, allowing me to listen along. By the end of this reading and listening experience I became a fan of her music and an admirer of her writing. You can read some more extracts from the book in this Brain Pickings article, which also makes connections to wider ideas of the importance of musical heritage.

If you have read the book this month, or before, here are some questions I would love to hear your responses to:

Were you a fan of Roseanne’s music before reading the book?

If you were already a fan what did you hope to find out about when you started reading?

If not did this book encourage you to listen more to her music?

What was the most interesting moment of the book for you?

Let me know your answers or any other thoughts about ‘Composed’ in the comments or on social media!

My selected book for MAY is going to be ‘Shout, Sister, Shout!: The Untold Story of Rock-and-roll Trailblazer Sister Rosetta Tharp’ by Gayle Wald. Rosetta will be inducted into the Rock Hall of Fame this weekend so I thought now was a good time to learn more about this artist. I hope you can read along and check back here on May 14th for a discussion.

I have also complied a playlist of the songs mentioned in the book so you can listen while you read along: