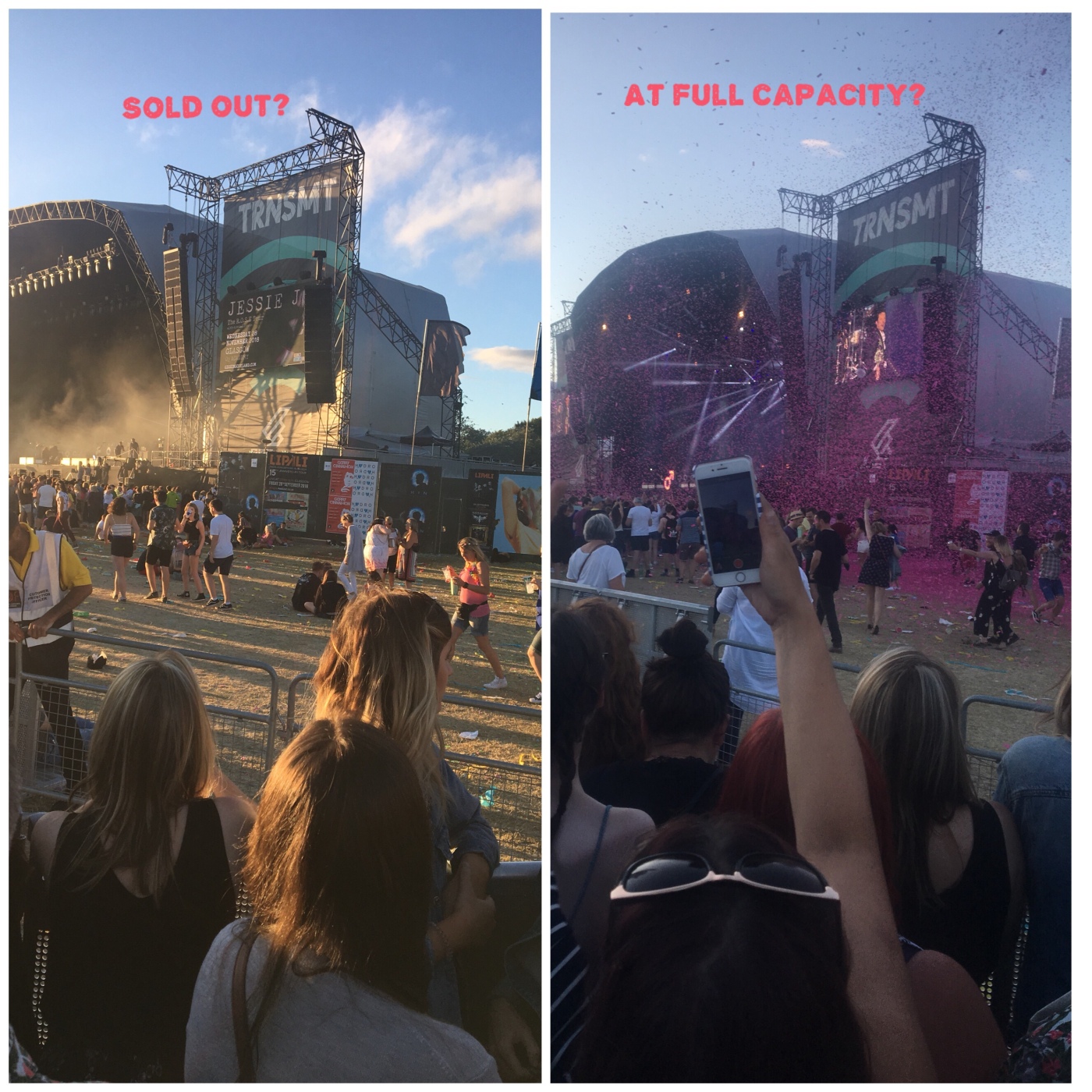 At TRNSMT festival on Sunday in Glasgow I witnessed one of the most depressing sights in my twenty-plus years of concert going. As the headline act, The Killers, took to the stage there was a huge expanse of empty space in a ‘golden circle’ section at the front of the stage, while tens of thousands of people who had paid good money to see the show were fenced off and squashed behind a barrier. From our stand point it looked like there was essentially two festivals: one for the rich and one for everyone else.

As it turned out this wasn’t the entire story behind this unfair segregation of the crowd. Organisers DF Concerts had advertised ‘golden circle’ tickets for the Friday night of the festival, headlined by Queen, and for a separate gig on Tuesday by Bruno Mars. The sales of these rip off ‘golden circle’ tickets have been so poor for both shows they ended up having to give them away ‘buy one get one free’, rightly angering the hardcore fans who had already shelled out full price. Despite this offer Queen couldn’t fill up the ‘golden circle’ space and I imagine it will be the same for Bruno Mars too. To separate out a standing crowd is a scandalous attempt to fleece customers out of more money and create a two-tier concert experience which discriminates against poorer fans. To see such a system fail is no surprise.

However sources at the festival and online have suggested that Sunday’s show, headlined by the Killers was not even supposed to have a ‘golden circle’ section at the front of the stage. No golden circle tickets were even advertised. A ‘VIP’ ticket was available for the day which offered access to other bars and toilets, but only multi day festival passes included the option for ‘access to the golden circle’.

It appears like DF concerts just decided not to bother removing the barrier for the Sunday show and then just made up the rules for entry to this section, without informing fans and changing their minds as the day went on. Some people who turned up early were given wristbands (rumoured to be only about 1500 people which would have barely filled a fraction of the space) and people with VIP passes were allowed in at first but then refused entry later when they left for food and drinks (there were toilets but no refreshments in this section). When I asked the security guard at the entrance if it was possible to buy an upgrade he said it was ‘sold out’, even though it was barely half full even when Chvrches (the second band on the bill) were playing. It did fill up slightly more for The Killers but nowhere near ‘at capacity’ as they then claimed.

Earlier in the day acts were playing to tiny numbers of people at the front while thousands who wanted to get up close were left stood miles from the stage. It was embarrassing and killed the atmosphere stone dead. If this decision was made for ‘safety’ reasons then it failed again because it actually caused more people to get angry, push and cause a crush than if they had just let more people into the front or just let people stand where the hell they wanted to.

And let’s get on thing clear – separating out a standing crowd should only ever be done for safety and not for profit. There are two simple ways to organise a barrier system: offer wristbands to first come, first served or operate on a one-in, one-out system. I have seen both of these systems used in the past at T in the Park and other festivals. The key point where TRNSMT failed is that you have to trust the security guards to FILL UP the sections. If it was a ‘first come, first served’ area like DF have claimed then they obviously hugely underestimated the amount of people required to fill it up and they should admit it. Leaving huge expanses of space between the crowd was in fact more dangerous because people pushed trying to get towards it, only to be met by barriers.

And let’s be clear this fiasco should never have happened in the first place because there was no need to have a ‘golden circle’ at any of these shows. The fans don’t want it and the bands suffered because of it. It was a real shame because the rest of the site was well set up compared to the unmitigated disaster that was T in the Park at Strathallan Castle, which this new festival has replaced.

And it is not just DF concerts who are guilty of exploiting fans. Similar set ups have been used at the BST Festival in Hyde Park and U2 also unfairly segregated standing crowds at recent shows. Seated concerts have been offering tiered prices for a long time, allowing those with more money to have a better experience. It is so depressing to see it creeping into standing shows and festivals. Ticket prices are already expensive enough.

As fans we have to take a stand. Even if you can afford these expensive ticket options please do not buy them. Do not allow others to suffer for your own gain. I for one am determined to try to avoid shows that try to exploit fans like this. TRNSMT festival will return next year and I hope DF Concerts apologise and announce the end of the ‘golden circle’ scam for good. It’s the least they owe us fans.

If you were at TRNSMT let me know your experience or if you’ve been victim of similar set ups at concerts and festivals I want to hear your stories.