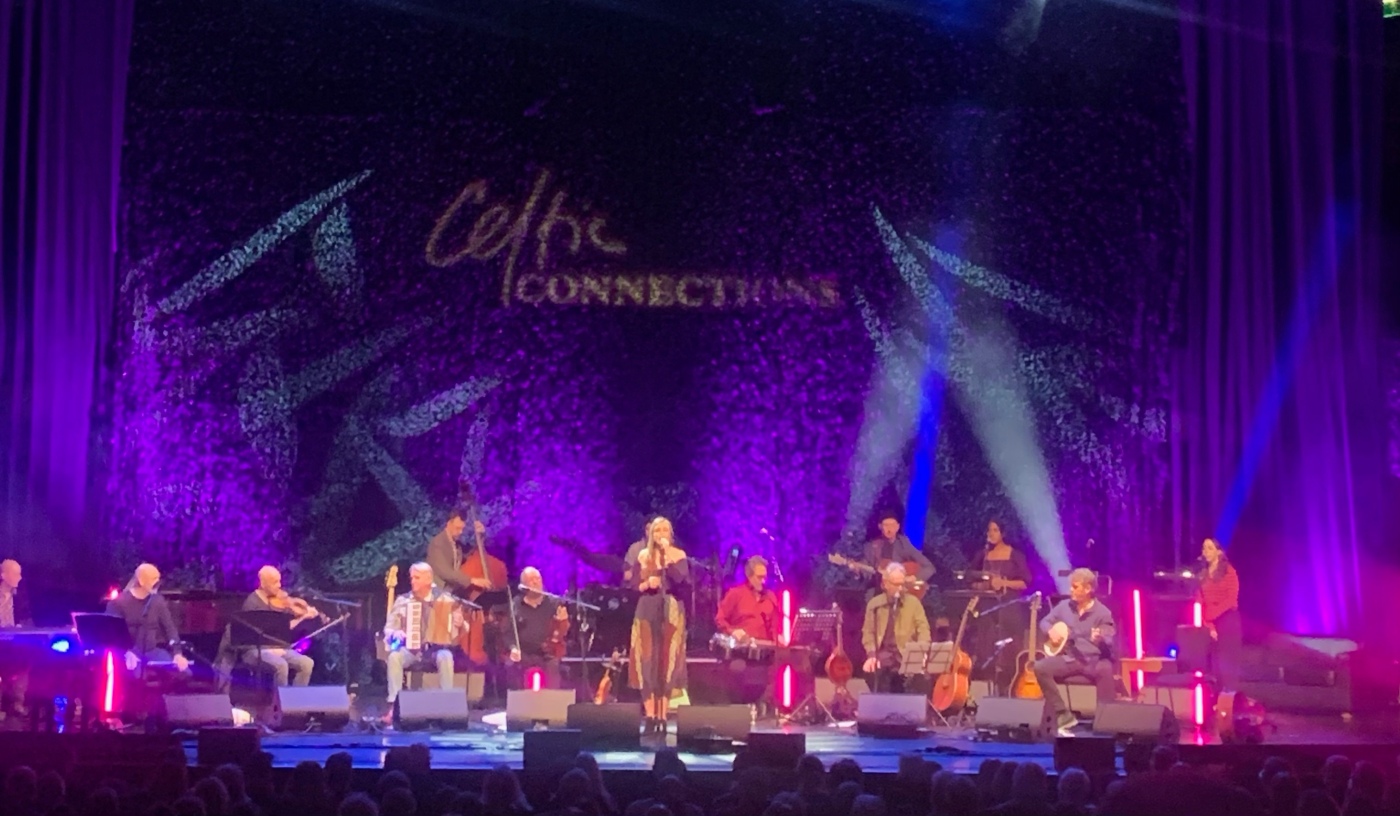 Rarely has such an evening of musical collaboration and connection been more needed or gratefully received – by artist and audience alike. Transatlantic Sessions began over twenty years ago to celebrate and forge links between traditional Scottish, Irish and North American musicians. After Omicron wiped out the Americana portion of the Celtic Connections programme, the only remaining North Americans who traveled to Glasgow for the festival were those on stage for this traditional evening of shared stories and songs. A rare moment of light in a bleak winter.

Musical directors Aly Bain and Jerry Douglas began the evening’s festivities with the first of many ‘wonderful to see you’ exclamations of delight. The familiar sounds of Waiting for the Federals began the evening and it immediately felt as if these last two years had gone by in a flash. The rest of the house band featured Phil Cunningham, John Doyle, Daniel Kimbro, Michael McGoldrick, John McCusker, James Macintosh and festival director Donald Shaw. A comforting and familiar roster of some of the greatest talents in folk music.

Despite the lack of diversity in the house band, or perhaps because of it, Transatlantic Sessions always features a strong list of female guest performers and this year was no exception. First up was Scottish singer Siobhan Miller who said she was ‘pinching herself’ to be invited to perform and sang some beautiful songs including ‘Mercury’, ‘May Morning Dew’ and ‘While the Whole World Sleeps’ the latter of which took on a new sense of poignancy because of the pandemic.

Leyla McCalla, who was last heard performing with Our Native Daughters, also took the stage with stories and songs inspired by her Haitian Creole heritage. The arrangements of the house band complemented her banjo and cello playing, seamlessly connecting across the cultural divide. Her song Day for the Hunter, Day for the Prey was dedicated to the many refugees displaced across the world, fitting for an evening inspired by the history of people, and music, travelling over the pond.

Sarah Jarosz, from Texas, was welcomed by Jerry Douglas like a returning prodigal daughter, now a Grammy winner and as he put it ‘fully grown’. She performed the beautiful Hometown and Orange and Blue from her album ‘World on the Ground’, as well as some highlights of her most recent song cycle Blue Heron Suite, both of which she released during the pandemic. She commented about how it was so wonderful not to be ‘staring at a screen’ and how grateful she was to perform these songs live on stage with so many of her musical heroes. Lets hope she returns to play with this band for many years to come.

The other guests were Dirk Powell, almost a house band member in his own right, who sang the classic Waterbound and dedicated it to his grandfather who never had the opportunity to become a professional musician. He wisely reminded us: ‘everyone’s got stories – just tell them.’ Irish legend Paul Brady also performed, finishing the show with a singalong of his song Rainbow, a glorious reminder of the history of this show which nurtures young and old talent alike.

The standing ovations at the end felt like an outpouring of real appreciation not just for the night’s entertainment but for the sacrifices and challenges those musicians have endured over the pandemic.

Bassist Daniel Kimbro wrote on Instagram after the show: “I wasn’t sure about music for a minute, but anytime I get that way my time with the folks of the Transatlantic Sessions resets my optimism gland.’ And he’s not the only one.

Lang may this traditional run.