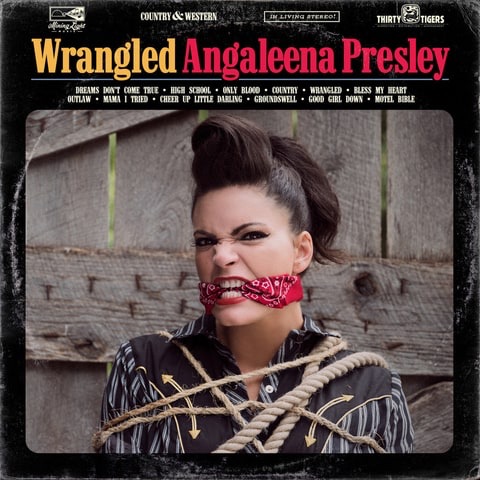 Country music is steeped in stories of poverty and heartbreak. These simple, everyday experiences sung to us by Dolly, Johnny, Loretta et al gave the genre its reputation for three chords and the truth. Of course these artists turned dirt into gold, selling millions and buying themselves mansions, ranches, theme parks even. What happens to the rest of the singers who don’t make it? How do you cope with the realisation that no matter how good a musician or singer you are, no matter how much you bleed into the lyrics you are never going to be a mainstream success? This difficult question is addressed head on in Angaleena Presley’s sophomore album, Wrangled.

This album is the soundtrack to Presley’s life and career so far – a Thelma & Louise style fuck you to everything and everyone that’s held her down. Dreams Don’t Come True could be funny if it wasn’t so brutally honest. Most people don’t make it and most people are blackly bitter about it. Nice to hear the Pistol Annies back her up (you may doubt if Miranda Lambert ever had to worry about selling T-shirts or breaking even but she’s had her fair share of broken dreams). Then Angaleena takes us back to the horrors of High School as if to say this shit has been happening our whole lives. No wonder people drink.

The most controversial song on the record is the Music Row baiting Country. This song is not representative of the sound of the album, featuring as it does a hilarious rap. But what this deceptively throwaway-sounding song does is ask the big question – why does the country music industry not support a talented artist to succeed? Margo Price covered similar territory in This Town Gets Around and has equally found herself out in the cold by the major awards and media. You would argue that Margo has been able to cultivate a different audience away from the genre with indie fans who are attracted to the sound of classic country or the cool of Third Man Records. Angaleena knows herself that she doesn’t fit into the pop mainstream or alternative Americana and this musical no man’s land is covered beautifully in the heartbreaking Outlaw. Then the brilliant rocker Mama I Tried goes even further – suggesting that she’s given the traditional Nashville road everything she’s got and then some. Now she’s ready to admit defeat and let her dreams go. At this point in the album she gets a little morale booster from legendary Guy Clark – he reminds her (and us) to cheer up, hold on to what we’ve got and never give in. Angaleena sings the song like she trying to convince herself to believe every word.

Much has to be said of the subtle genius of the song order choices, echoing her own journey from despair to somewhere else entirely. The riotous Good Girl Down is a feminist ode that has all the sass and blister of someone brimming with new found confidence. Both that track and the album finale Motel Bible have a vintage rockabilly sound that suggests she’s freed herself from the ropes of country music that she’s been so long tied in (see the brilliant cover art).

This album finishes with her accepting the lot she’s been given in life and in music. If she doesn’t find the congregation that she deserves then she’ll enjoy herself either way. After all preaching to the choir gets a little stale – sometimes you have to go on a different mission. Wrangled is the sound of an artist who has found a new faith in herself and you can only hope that a few more believers start to see the light.