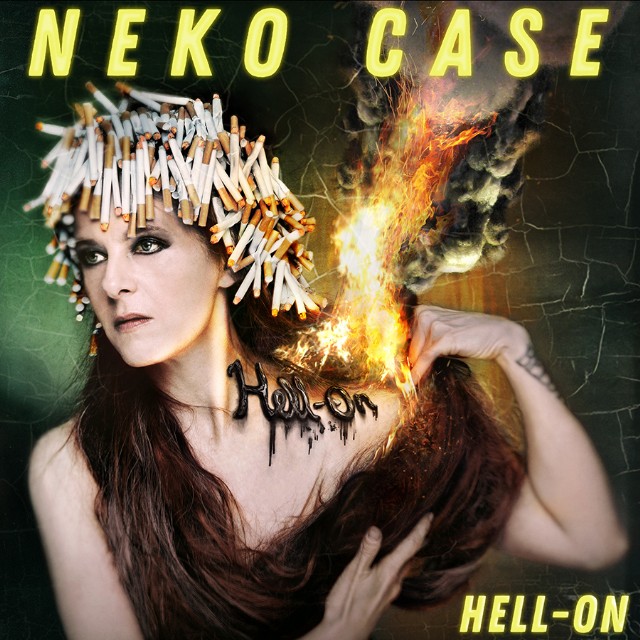 On the startling front cover of her new album, Neko Case’s head is covered in cigarettes and she starting to catch fire. It is somewhat alarming on first inspection, especially considering her house actually burnt down recently, but maybe using the violent imagery is her way of accepting such an unlucky fate. Hellion is a word for a rowdy or mischievous person and you feel that spirit and don’t give a fuck energy radiating out of her very core. Hell-On was mostly recorded before the fire so don’t except songs to directly reference that incident but Case has always made art out of life’s disasters and these songs continue in that vein. Produced by Neko herself, with Bjorn Yttling, this album offers no simple narrative and makes no concessions to genre or trends. Because of this sense of originality, Hell-On feels like a vital addition to her already impressive discography.

There’s thunder and threat simmering under the surface of the album so on first listening everything sounds glossy, easy even but that belies the complexity of the central imagery and ideas. The title track Hell-On starts with the ringing of a bell and her voice singing about God. Like many of songs on the album it unfurls slowly, like a storm approaching from a distance. Have mercy on the natural world she sings, even if wishing for such things appears futile. The song contains the repeated refrain ‘nothing quite so poisoned as a promise’ which could refer to any promise really – from family, lovers, politicians. Most of these songs have turned the anger about the world inward, it’s not the ‘roar’ that the Guardian review said it was, instead the music is like a despairing sigh.

Last Lion of Albion demonstrates the strength of her singing, years gone and still a distinctive singular force. There is mystery in the lyrics and the music, a lack of directness which could be alienating to some but that is how she wants us – at a distance, trying to figure things out. Halls of Sarah plays on this further – with its strange riddles and almost a jazz sound to the arrangement.

Bad Luck is the catchiest and most upbeat song, despite it being about misfortune. On the song she accepts her bad luck with a weariness – don’t you wish you could stop everything? She asks and it’s hard not to agree. Her blunt assessment of life and work feels fitting. So I died and went to work / it’s not as bad as I thought it would be but it’s still pretty bad luck. Such is life.

Curse of The I-5 Corridor starts almost like a spoken word poem before it hits us with the best line on the album: ‘I fucked every man I wanted to be, I was so stupid then’. Women everywhere ruefully laugh in sympathy and solidarity at the story of her life. Maybe I should go home alone tonight, she sings but you know she won’t.

Many of the songs have an airy feel to them, like Gumball Blue. Weird noises echo and cut out, creating unusual and imaginative soundscapes. Dirty Diamond and Oracle of the Maritimes follow a similar structure and style, working like poetry set to music. Lines grab you and make you take notice at random moments, but she never uses them for cheap hooks. Sleep All Summer is the album’s outlier, a cover and a simple song which feels refreshing and hard won.

Last time I saw Neko live I went to the show on my own and I got wasted for no particular reason. As I listened to those songs, with all those strangers I realised how some people take their collective rage about life and write songs about it, turning it inwards on themselves. Others, like myself, just drink and listen in solidarity.

Spending time with Hell-On is a similarly comforting and uplifting experience. The world might be burning around us but maybe it’s not as bad as we think, as sometimes when there’s smoke it’s just a smoke machine honey. Accepting your fate is a liberating experience and in this case it makes for an unflinchingly brilliant album.