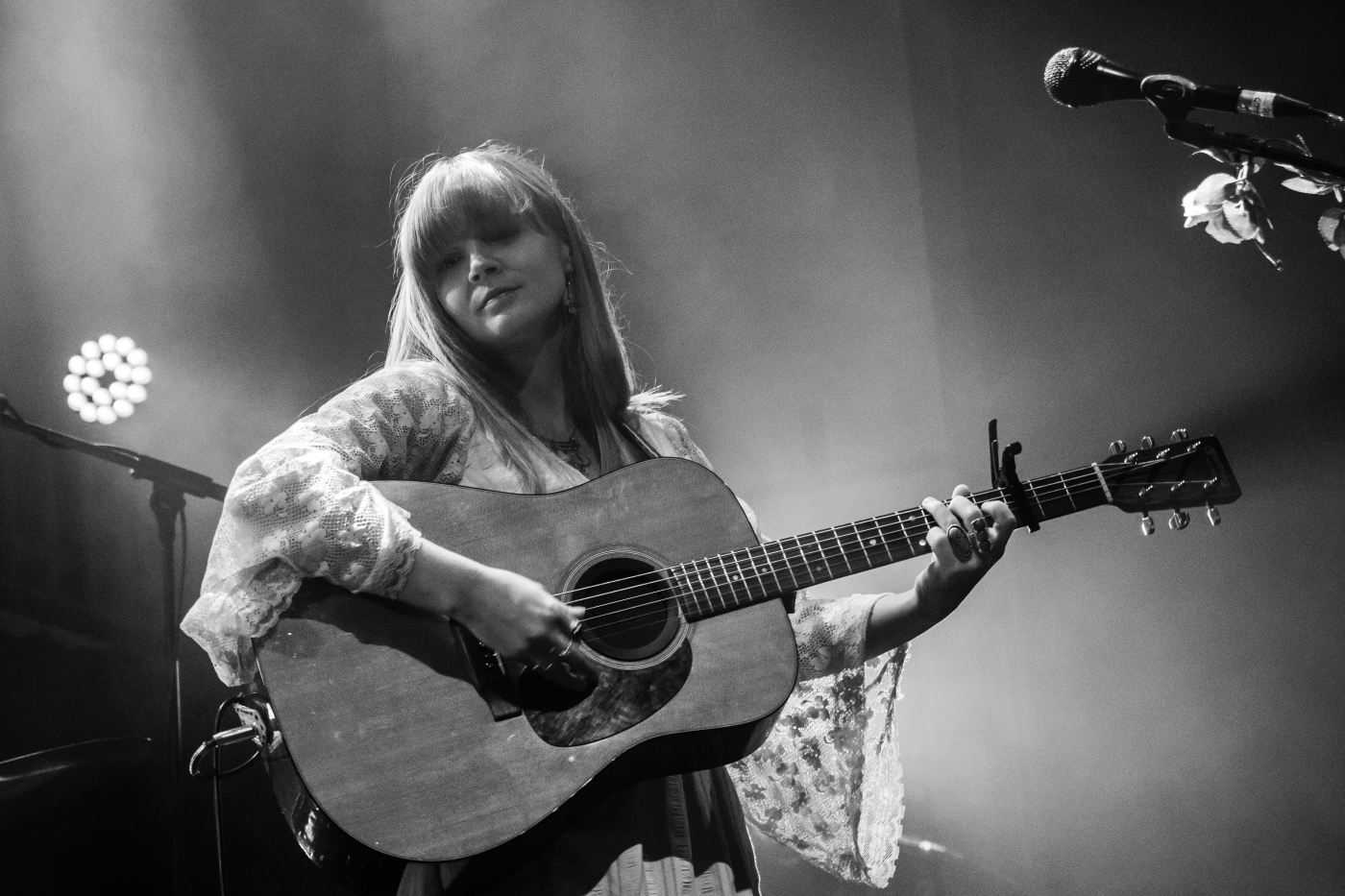 At the end of her recent live show in Glasgow, Courtney Marie Andrews parted the crowd and jumped down off the stage to meet her people. In the centre of the room she began singing the title track to her album ‘May Your Kindness Remain’ entirely unplugged. Without amplification the already epic song somehow grew in sound and stature. We stood round her in awe, smiling and wiping away tears. When she finished she received a roar from the crowd, all of whom were thankful to be witness to this musical moment of sense and sanity in an ever spinning world.

Courtney Marie Andrews is a songwriter who asks questions – of her listeners and of herself. She makes us consider the importance of kindness, compassion, love. The power and presence of her music in my life this year has been such a gift and thus there was only one possible choice for the Highway Queens album of the year.

In 2018 I have been lucky enough to see Courtney play live four times in various venues across Scotland. Every show has melted my heart and convinced me that I will be listening to her for a very long time to come. The first show I was privileged enough to hear was during Celtic Connections in January. The festival had booked her into an odd choice of venue for a solo acoustic gig, since the ABC was a place more suited to being used as a nightclub or for rock gigs. Yet the venue posed little problems for Courtney – alone on the stage, all in white she commanded the vast room with her voice and new songs. The year of kindness had begun.

I attended the gig alone, as I often do. Attending shows by myself has become a necessary part of being a music fan. Sometimes it’s the only option if you want to see the gig and other times it’s just easier to go yourself rather than drag a friend who may not appreciate the music. Luckily for me after the show in January I made friends online with some other fans and so it was fitting that I met them during my second Courtney show of the year, at Summerhall in Edinburgh. Every fan I spoke to was so lovely, confirming that the kindness of strangers can indeed be a wonderful thing (the photograph which accompanies this piece was taken by Kendall Wilson, one of the people I met at this show). By now Courtney’s album had been released and we were all anticipating hearing the new songs being played with the full band. And she didn’t disappoint – her performance was brimming with an increased confidence, which surely came from knowing that the new songs were special.

May Your Kindness Remain received rave reviews from The Guardian, The Telegraph, NME, Q, Stereogum, The Times and more, also ending up on many end of year lists. Writer Jason Scott, in his review for the ‘Bsides and Badlands’ blog, described her songwriting as offering ‘solace’ and ultimately awarded it his album of the year. Other bloggers supported the album in swathes, revealing a genuine connection to the music that was more than just a customary response to a PR pitch. I am proud of the album review I wrote for this blog, believing it to be one of my best pieces of writing all year. When the music is this good, the words come easy.

Unfortunately one critic did not agree. Uncut magazine attempted a hatchet job on the album, calling the songs ‘overwrought’ and ‘ridiculous’. I understand that music taste is subjective up to a point but some albums are powerful and ultimately undeniable, like this one. I was appalled that any major publication could get away with such an off-hand dismissal of someone’s work. Declan Culliton’s spirited letter of response was published the next month, rightly criticising the magazine for their ‘unprofessional’ and ‘vindictive’ review. Thankfully the magazine ended up voting May Your Kindness Remain the 25th best album of the year, which went somewhat towards making up for their original response. In the end Kindness had won.

The album explores kindness in many forms: being kind to yourself (Lift the Lonely From Your Heart, Rough Around the Edges) being kind to others (the title track & Kindness of Strangers) being kind in love (I’ve Hurt Worse, Took You Up) and kindness in political and social terms (she unpicks the American dream in Border and Two Cold Nights in Buffalo). Every song is a thoughtful consideration of what it means to care.

Courtney played shows in the U.K. again in August, a relentless touring schedule which shows her commitment to the U.K. fans who had awarded her Americana artist of the year. I was unable to attend any of those shows but was struck by a review of her Norwich show by blogger Richard Shashamane, who discussed the power of simply wearing a t-shirt with the album title on, explaining ‘I have never had so much reaction to an item of clothing as I do when wearing this shirt, I am often told by people what lovely words they are and asked where they come from. It’s a wonderful thing and I have consequently connected with and often seen the kindness of strangers as a direct result. We need more of this sort of connectivity with each other.’ Music is one way of connecting and I believe an artist like Courtney Marie Andrews can unite people and make them think about what’s important in life.

Soon the winter closed in, December arrived and I found myself back in a room listening to Courtney, this time in Perth. The intimate venue was a small theatre and I sat in the front row, happy to absorb the songs that had now become embedded in my life since I had last seen her live in April. This tour had a looser set up, less focused on the new album and more of a wide ranging walk through her catalogue. What struck me most was her performance of the song ‘Paintings for Michael’ from her album ‘On My Page’. The song was written for her uncle, an incarcerated painter who had been reduced to working with paper since he had his art supplies taken away from him in jail. The song’s central refrain ‘Michael I don’t know what you did to deserve such hard time’ is not accusatory, it’s filled with empathy for another’s suffering. Courtney doesn’t dwell on the crimes committed, instead she questions the punishment. The song is years old but when she played it among her more recent work you could see the tapestry of compassion woven deep in her songwriting.

The next night I journeyed to Glasgow to see her again – well it was my birthday and I couldn’t think of anywhere else I’d rather be. Before Courtney took to the stage she was introduced by local DJ Mike Ritchie of Celtic Music Radio, who described May Your Kindness Remain as a ‘sparkling, joyous and uplifting album with songs of intimacy, compassion, warmth and astute scrutiny.’ The Glasgow crowd were equally smitten, welcoming her return with a rapturous response (we were also relieved to see her since she had been ill earlier in the week, putting the show in doubt). Despite the venue being all-standing you could hear a pin drop when Courtney performed. Such respect should be a given but is actually a sad rarity at live shows. Courtney quietly commanded attention with the power of her songs alone. The crowd listened reverently to every note.

The show ended with the moment which began this piece. It was something really special to hear her voice booming out into every corner of the room, reminding us that in the end only kindness matters. As she left the stage I thought about our disparate experiences of 2018. Courtney had been travelling all over the world, singing for everyone lucky enough to listen. I hadn’t been far – just to work and back most days, barely crossing the Scottish border. But the music had taken me somewhere all the same – somewhere beautiful, somewhere brighter than I been before. During the year if I was ever struggling I started to hear moments from this album repeating in my head, giving me strength and reminding me I wasn’t alone.

After the show ended Courtney sat at the merch table signing and taking pictures with everyone. The message she wrote on every album was, like her music, simple, direct and true: stay kind.

Listen and you won’t regret it: https://courtneymarieandrews.bandcamp.com/album/may-your-kindness-remain

2 thoughts on “Album of the Year: Courtney Marie Andrews – May Your Kindness Remain”