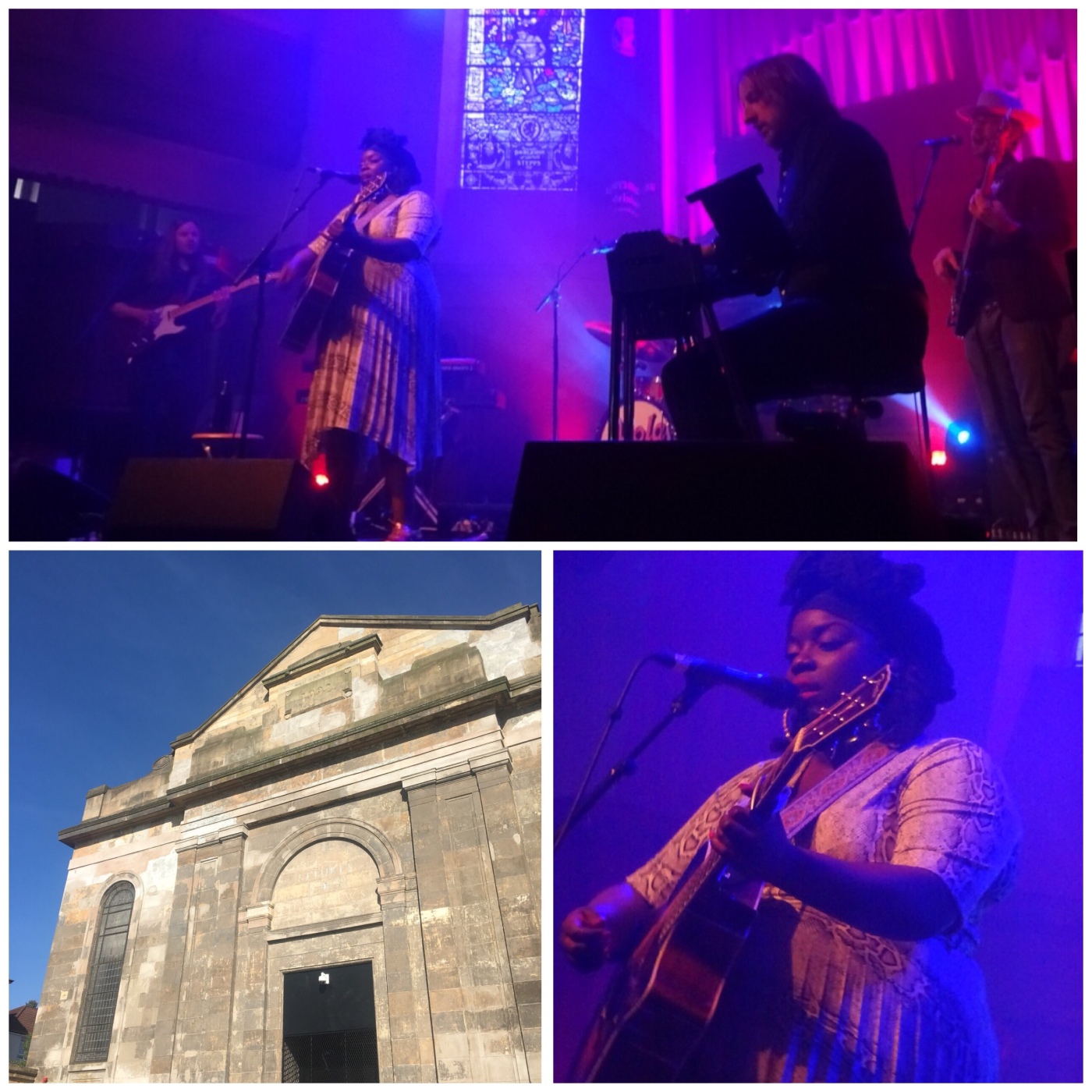 Since the release of her solo album Walk Through Fire earlier this year Yola has been winning fans and admirers on both sides of the Atlantic. As well as support from Radio 2, she has been receiving rave reviews across the board and will tour later in the year supporting Kacey Musgraves.

As everyone took their seats on the gorgeous spring evening there was a real buzz of anticipation and happiness in the air. St Luke’s is the best venue in Glasgow – the church acoustics never fail to showcase a singer to the best of their ability.

Opener Lady Nade, also hailing from Bristol like Yola, was a charming and chatty personality who impressed the crowd with her distinctive mix of folk, jazz and soul music. She’d written her setlist on a hummus package and the food theme continued when she explained that you could actually eat her songs since she’s written recipes to go with her new album Safe Place out May 17th. Highlights of the set included the track Complicated, which showcased the sublime control she has over her voice and the lovely La La Larve which finished off this sweet little set.

When Yola took to the stage she was greeted warmly by the Glasgow crowd, beginning her set with the impressive Lonely The Night, her voice as rich and wonderful as on record. When the song was done she admitted suffering from the ‘fun tax’, after drinking too much Scottish whisky on tour, so while her speaking voice was a little hoarse thankfully she still managed to belt out her songs unaffected.  In fact songs like Shady Grove and Ride out in the Country sounded even better live, aided by her excellent touring band.

Yola has paid her dues and worked those jobs that you have to do to support your artistic endeavours, singing all about it on her ode to the grind ‘Love All Night (Work All Day)’. It is so heart warming to see her talent finally being rewarded and celebrated by a capacity crowd.

Country music is a place where people have long gone to tell personal stories of heartbreak and strife and Yola has been inspired by that genre to write her autobiographical song Walk Through Fire, about how she coped watching her house burn. She even proudly showed us her scar, a ‘badge of fire’ and reminder of what you have to endure to reach the other side of the struggle.

One of the highlights of the night was Yola’s cover of Birds of Chicago’s Never Go Back, a real spinetingling moment of inspiring soul music. Her encore also featured two great covers – of Joni Mitchell’s Big Yellow Taxi and Joe Cocker’s The Letter showing the range of influences behind her work.

The stand out songs in the set were It Ain’t Easier and Faraway Look – both uplifting weepies sung with serious heart. She finished on ‘Fly Away’ from her debut solo EP, leaving the stage to a well deserved standing ovation.

News broke after the show that Yola had received nominations at the Americana awards for Emerging Artist of the Year and Album of the Year. Win or lose Yola’s star will no doubt continue to rise. The Americana genre should count themselves lucky to have her.

Yola’s UK tour continues through this month and more dates have been announced later this year: https://www.iamyola.com/live