Earlier this year Jenny Lewis released one of the best albums of 2019 and of her career. ‘On The Line’ told the story of her recent life, including bereavement and the end of her long term relationship. The music was unexpectedly uplifting, glorious even in the darkest moments. And so the sold out Saturday night crowd here in Edinburgh had come to celebrate and commiserate with her, and maybe even dance a little.

Support for the evening came from experimental folk trio Slow Moving Clouds. An odd contrast to the headliner perhaps, but the strange beauty of their music was haunting, and moving at times. Later the band would join Jenny on stage to accompany her on some songs too.

Jenny arrived to a rapturous reception and began her set on the piano, brilliantly performing two of the best songs from the album – Heads Gonna Roll and Wasted Youth. The stage was lit by the plastic telephones on either side, and bathed in pastel pinks and blues. Her excellent backing band included Jason Boesel on drums and Emily Elbert on guitar.

As Jenny walked forward to sing The Big Guns, we saw her stage outfit in its full splendour. The full length sparkle dress echoed vintage film stars and Las Vegas headliners of yesteryear. In her solo career she has always played with her image to a certain extent, but now she seems comfortable with embracing glamour, like we saw on the recent album cover.

The songs from previous album The Voyager slid seamlessly into the rockier set, songs like She’s Not Me and Head Underwater sounded particularly strong and the reggae remix of the title track was totally inspired. During Just One of these Guys Jenny seemed to lock eyes with me in a show of mutual understanding, and while maybe I dreamt it, I think it’s safe to say there was more than just a few kindred spirits like myself in the front row for whom these songs also have a deep personal resonance 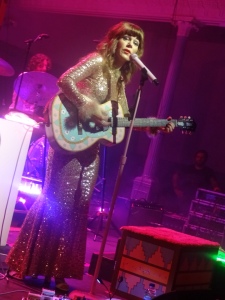 What struck me as a fan is just how enjoyable this tour is, for the crowd as well as the band on stage. Pink and blue balloons blast out of canons and we hit them around the room like we’re in some funhouse somewhere without a care in the world. We danced to Do Si Do, Little White Dove and See Fernando despite their troubling themes. Life is like that sometimes.

With Arms Outstretched was the only Rilo Kiley song in the set and she sang it alone on the podium, with just her guitarist and the crowd on accompaniment. Its stark beauty was a moment of shared nostalgia for those old songs and memories of days long gone. We can’t go back but we can still sing along.

The encore began again at the piano, with Dogwood – Jenny’s favourite song from the new album. A prebreakup song, a haunting prophecy for her doomed relationship. Thankfully she salvaged these songs from the wreckage. Party Clown is introduced with a reference to the weekend’s mass brawl on a cruise ship started by a man dressed as a clown, such random moments of life often find their way into her songs.

She finished the set on a melancholic note, first with Melt Your Heart and then Acid Tongue, where we sing along like a choir of wasted youth exorcising our collective past. Over the course of her post-Rilo career Jenny has been involved in many different projects and collaborations, as though she was always slightly reluctant to step into the spotlight alone. Now she stands on the podium, arms in the air drinking in all the attention and applause she richly deserves.