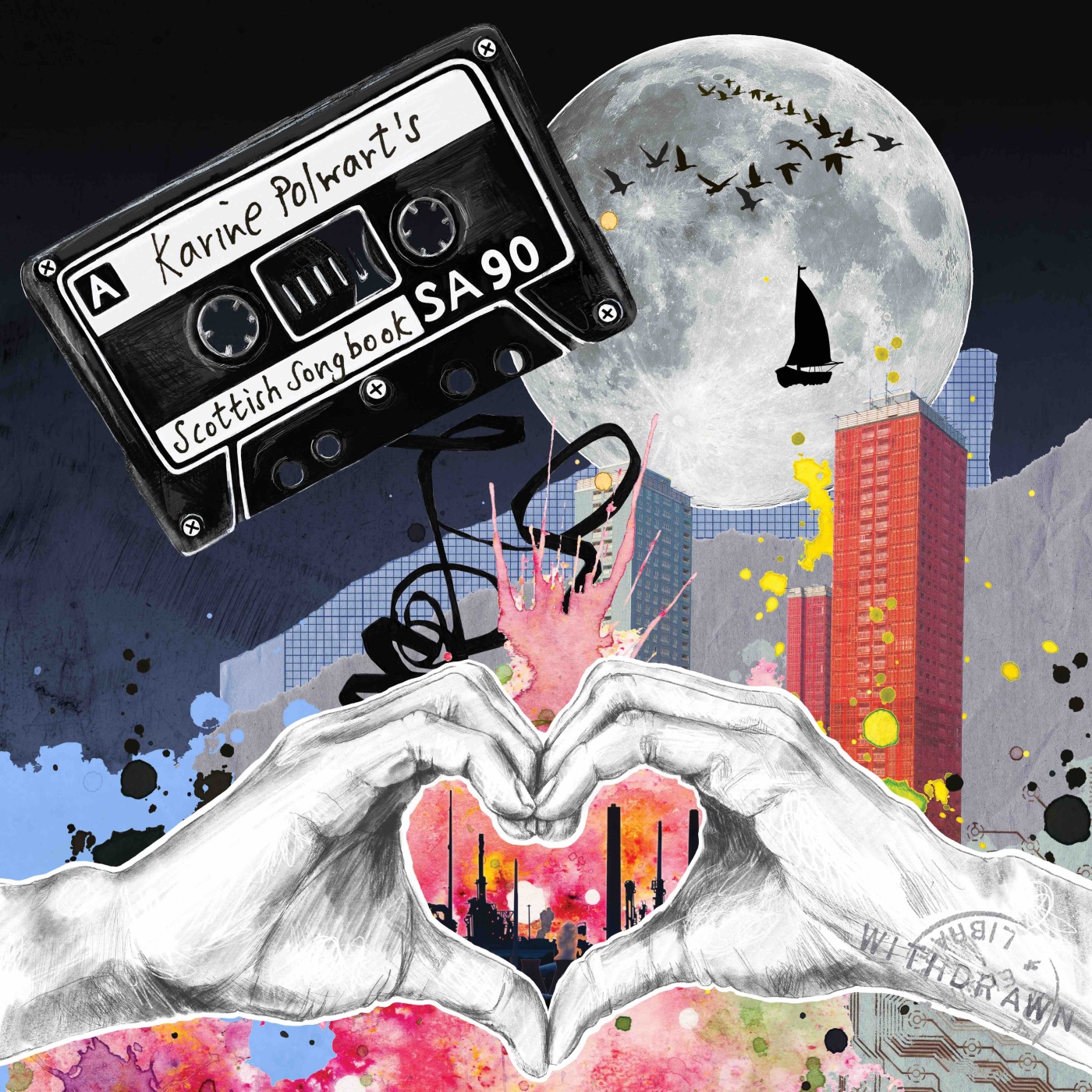 Karine Polwart has an artist’s eye for detail, a poet’s way with words and a classic folk singer’s voice. Following on from the powerful Wind Resistance project and Laws of Motion album, to release a collection of covers might seem like an odd turn to the lighter side of music. This new album came from a live show at the International Festival where she performed a number of contemporary Scottish songs, in celebration of our country’s talented songwriters. Rest assured this is not karaoke – these songs have been carefully chosen and majestically arranged. Polwart asks us to think about how songs gain meaning by connecting them to the place they come from.

The opening songs on this album come from the 80s, a decade where Polwart was young and Scottish music was part of the popular zeitgeist. The Waterboys’s ‘The Whole of the Moon’ is a moment of nostalgia for that era, lovingly sung, with beautiful backing vocals by Inge Thomson. The Blue Nile’s From Rags to Riches transforms into something soaring and uplifting – capturing a feeling of positivity that wasn’t in the dark, Thatcher-era brooding original. There’s poignancy to the Polwart’s choice of Big Country’s ‘Chance’ about despair and abuse, especially since we know that Stuart Adamson’s life ended in tragedy. His words remain powerful and Polwart has referenced a 1985 interview where he said, ‘Popular music can never be valid and worthwhile unless it reflects the environment that it comes from…music of any kind should be a working, living and breathing part of a community.’ Folk singers have always understood this and you can’t help wondering how much we lose when music becomes homogenised or worse, increasingly Americanised.

Music is deep in the bones of Scottish life, some songs have such significance that perhaps it’s hard to explain why to those who don’t come from here. Dignity by Deacon Blue is one of those songs for me. The song perfectly distils that national trait we all share: hope of a better future. It was my dad’s favourite song, and after he died one that became a sentimental favourite of my family. Whenever I hear it now I don’t just think of his unfairly shortened life, but it makes me dream of a better ending, even if I know it can never come true. That gap between dream and reality is where this song lives and, for me, where it gains its power. Karine’s version is perfectly understated in a way that makes the words (and the dream) quietly resonate even more.

The album skips the 90s and instead covers songs by Chvrches, Biffy Clyro and Frightened Rabbit. The latter is particularly affecting in the wake of Scott Hutchison’s suicide. When we lost him it was a hammer blow to the Scottish music scene, and to think his songs would never be sung again felt crushing. After the recent Tiny Changes tribute album and this cover by Karine, I have begun to feel hopeful again. Scott is gone but his music doesn’t have to die if these songs can be gifted to other people. Karine sings Swim Until You Can’t See Land with sadness but a fierce hope too.

My favourite song on this album is one I wasn’t familiar with before – Strawberry Switchblade’s ‘Since Yesterday’. Polwart’s beautiful retelling of the song inspired by her grandfather’s battle with dementia. His voice can be heard spliced into the song, which just adds to the subtle strength of her interpretation.

The album ends with Ivor Cutler’s ‘Women of the World’, (sung with Louis Abbott of Admiral Fallow) and Polwart turns this wry, sardonic song into a ‘manifesto’. Women of the world take over / because if you don’t / the world will come to an end / and we haven’t got long’. Ideas of feminism and change are central to much of her own songwriting, so it is a fitting song to choose to finish her covers album.

Memory, despair, love, hope, freedom, music – just some of what we’ve built a nation on. You don’t have to be from here to appreciate Karine Polwart’s Scottish Songbook, but it certainly helps.

The album is available on beautiful red vinyl, with stunning artwork from Jen Frankwell so please consider purchasing: https://www.musicglue.com/karinepolwart/?fbclid=IwAR0qiCL8sBHnYYZSD-SJ5t8RQTv–POofpAGkZpClZfeHPShpQ6co6I122Q