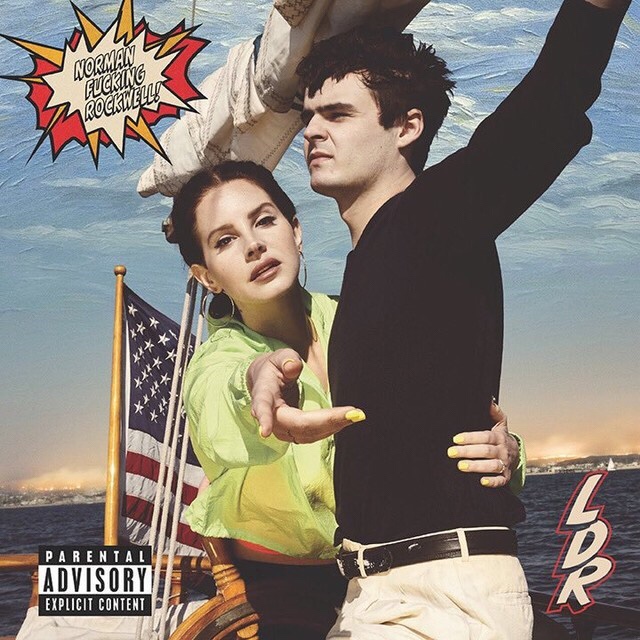 I hadn’t listened much to Lana Del Rey before I began writing this blog. Sure I knew Summertime Sadness and Video Games but they didn’t encourage me to listen further. There was something about her sad-girl-loves-bad-boys image that made me think she was a construct, a record label fantasy surely created by a man. Her dead eye stare was as cold as the beats of her over produced music.

And, to be honest, I still don’t know if I’m entirely wrong about those initial assumptions. What I do know is that with Norman Fucking Rockwell! Lana Del Rey just released one of the best albums of 2019. Her quiet evolution into one of the most vital voices of this year has been quite stunning to witness.

The first sign I had that perhaps Lana was heading towards my musical horizon was on her last record Lust For Life. As a blogger I aim to listen to as much music as possible, mainstream and otherwise, to see what’s out there for me to fall in love with and hopefully write about. What drew me to that Lana album was her vintage style on the cover (as superficial as that is to admit). Plus I knew some people I follow liked her so I thought I’d give her album a try. After one listen I was still unconvinced. Afterwards though, I found myself returning to one song quite often and thinking that it had something of real substance in it.

‘Coachella – Woodstock in My Mind’ is a pretty terrible title but lyrically the song felt like a revelation. It contemplated the glory of youth, the power of music to unite us, the lost message of the sixties revolution and the state of the modern world. She combined her nostalgia for the past with a prescient eye on the future. Disappointingly for me the music didn’t live up to the words. It should have been a strummed sixties psychedelic dream (like what Kacey did on Golden Hour). Instead those ubiquitous computerised beats did their best to ruin it for me.

So even though I admired a lot about that song I didn’t hold out much hope for this new record. When I heard Jack Antonoff was producing I was even less interested, since even though I loved the St Vincent record he worked on, that felt like it was in spite of him rather than because of him.

Music blogging teaches me so many lessons, and in this case it’s to always keep an open mind. Sometimes you don’t understand or love an artist straight away. Maybe you even question them warily. The most important thing as a music fan is to not write someone off forever. There’s always a possibility that an artist will grow on you or one song will transform your attitude towards them entirely.

Hope is A Dangerous Thing For a Woman Like Me To Have – But I Have It was that song for me. Despite being released in January it was only earlier this month that I listened to it and instantly fell in love. An end of summer sadness had hit me and the song felt like the perfect soundtrack to that fading light (plus any song that references Sylvia Plath is halfway to my heart before it begins). It was a hushed piano ballad telling the story of her despair, unravelling and eventual acceptance of the power of hope. The beauty of the poetry matched the beauty of the music.

The other pre-released songs equally impressed me. Venice Bitch had a level of self-deprecating humour to it that I didn’t expect. You’re beautiful and I’m insane / we’re American made. The references to the work of Norman Rockwell were intriguing and made me think about how the whole record was about the painful truth of life that sometimes you can’t help but fall for the allure of the Hallmark dream of domestic bliss. The song sounded so beautiful – the understated production allowing her ideas to slowly and fully flourish through the ten minutes of the track.

Mariners Apartment Complex was another gorgeous piano and string-laden song about doomed romance. The tropes of her previous albums were still here but they felt real for once. Or maybe I just believed in her now in a way I didn’t before. I’d caught the wave and understood her sweetness, darkness, deepness.

The other songs that were released before the album were Fuck it I Love You, Doin Time (a cover of a song by a band called Sublime) and The greatest. The first two were enjoyable and atmospheric. It was ‘The greatest’ however, which really stopped me in my tracks and made me realise that this album was shaping up to be one of the best of the year.

After such a depressing week in the music community I really needed a song like this to express those dark feelings brewing inside of me. Every line on the song is about the loss of something, the way life just disappears and all you have left is the burnt out wreckage of your dreams. And at that moment she sings, ‘if this is it I had a ball’, finding beauty and even joy in the impending apocalypse. Vocally the delivery of the song is just breathtaking.

And we should give her some serious credit for the fact that in one line she has done what Taylor Swift has been trying and failing to do over two albums – burn Kanye West and his hubris right to the ground. Lana even has the grace to sound sad about his downfall, which shows the kind of compassion for others that Taylor has consistently failed to deliver.

When you listen to an album out of sequence due to the release schedule it can be hard to go back in and immerse yourself in the whole thing. I spent time listening obsessively to these songs and so I hoped these new ones wouldn’t feel like an intrusion.

I really shouldn’t have worried. The opening title track begins with the line: God damn manchild / you fucked me so good I almost said I love you. I mean, wow. And then the rest of the song is just a perfect take down of the immature manic pixie dream boy whose feet she once happily kissed. The subtle references to her Joni Mitchell influence are also nicely done – you color me blue.

The middle of the album does slow a little, even if the atmospheric music and great lines keep coming. I do wonder why any album needs to be over forty minutes in the year 2019. Maybe it’s a record company tactic to generate streaming data. Love Song asks is it safe just to be who we are? And you wonder if that’s a question not just about her relationship, but her music career as a whole. Interesting that Courtney Love has criticised some of her marketing strategies for this album and called out the record label as being too much in control. For me I think Lana and the record label deserves more credit – after all they have let her record a really uncommercial album without any obvious radio songs on it, so there is hope that the music industry can get it right sometimes.

Cinnamon Girl is sadly not a Neil Young cover (would have loved to hear that) and is one song I probably would have cut from this album, as it leans a little back on the modern beats. Similarly How to disappear is another that sounds good but washes over a little. California has better lyrics and builds from a lovely regretful piano lament into a something more expansive about second chances.

The Next Best American Record is about how ambition and love can too easily become entwined. That one, Bartender and the lovely Happiness is a Butterfly were cowritten and produced by Rick Nowels. While these songs are lush and listenable I do have to conclude that the tracks produced and co written with Antonoff are superior, suggesting the collaboration has brought out in the best in both of them.

Norman Fucking Rockwell! is never short of sublime. If this really is the end of the world as we know it, then thank fuck we have music as good as this to help us feel fine.