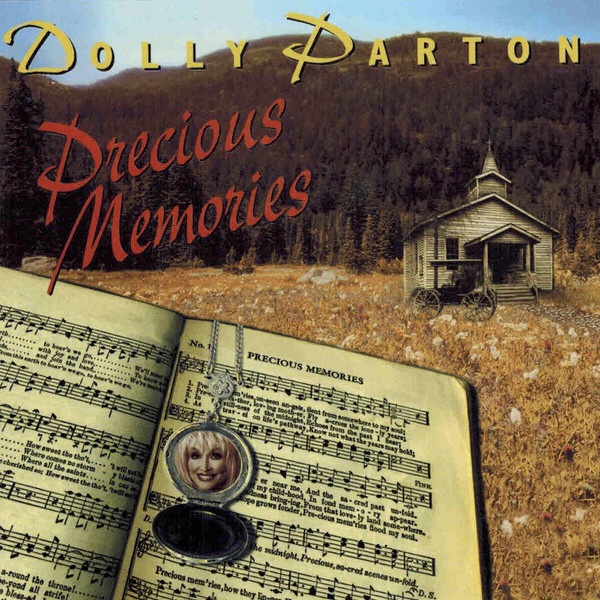 In her memoir ‘Pilgrimage to Dollywood’ writer Helen Morales sums up the appeal of Dolly’s theme park concluding that it ‘has taken elements of America and distilled them into their essences: God, family, patriotic pride, country, nature, memory and optimism.’* Here we also find a perfect list to sum up the values of Dolly herself which have allowed her to maintain a strong core fan base in America’s rural and conservative heartlands despite her concurrent foray into glitz, glamour, Hollywood, pop music, cosmetic augmentation and progressive causes.

And so this album Precious Memories is one designed for her heartland base and in fact could only be purchased at Dollywood itself, with all proceeds going to the Dollywood foundation (it can be heard on YouTube for those who have not made the trek to Tennessee). Consisting of spirituals the album follows The Golden Streets of Glory as her second full gospel collection. Musically the production has a similar traditional tone to her bluegrass trilogy, which she would record immediately following this album.

The cover features a rustic looking chapel with an old cart parked outside and a hymn book open to the title track. It looks like the old chapel you can visit at Dollywood – a building which was actually constructed in the 1970s as a vintage reproduction. When Dolly bought her theme park in the 80s she renamed it for the traveling doctor/preacher of her youth Robert F Thomas. Much like that chapel, this collection aims for an authentic slice of mountain gospel as though Dolly is fresh from the cabin rather than a mansion in Nashville – the audience doesn’t mind the blurring of fact and fiction, reality and rose tinted lenses.

The album begins with a simple piano based arrangement of Precious Memories, allowing her voice to fly sweetly across the melancholic lyrics. Nostalgia lingers in every note. The song itself was written by Tennessee native JBF Wright and has been performed by many country stars including Emmylou and Waylon as well as Bob Dylan, Sister Rosetta Tharpe and Aretha Franklin among others.

Power in the Blood is sung with the help of her family choir and a bluegrass style band, the lyrics concerning those three Southern strongholds of Jesus, farming and family. Blood harmonies are so central to the appeal of this kind of music – never underestimate the simple power of hearing families sing together.

In the Sweet Bye & Bye is another simple slice of beauty – sung with her siblings, raising the goosebumps. Even if the song became a cliche in its time, to hear it now its hard not to feel some hope shining through the gloom.

The song Church in the Wildwood has quite an interesting history, being lost for some time before folk singers rescued it from oblivion while simultaneously creating a tourist attraction out of the ‘little brown church in the vale’ which inspired the song. Much like her own ‘Tennessee Mountain Home’ this rural place of worship is sacred no matter how simple or backwater – an idyllic, imagined world that Dolly has sung of so many times before.

Keep on the Firing Line works well with Dolly’s voice, the war metaphor of facing ‘bullets’ in the hope of a ‘reward’ at the end is like a more disturbing version of Dolly’s ‘if you want the rainbow/ you’ve got to put up with the rain’ aphorism.

‘Amazing Grace’ is well sung as you’d expect, although maybe this version does sometimes veer too close to that cloying, saccharine production which so ruined her late seventies albums. ‘Softly and Tenderly’ suffers the same problem, although it’s a more interesting song choice and the refrain ‘come home’ feels poignant.

Better is her version of ‘Old Time Religion’ which is more country and benefits from the return of the family choir on backing vocals. ‘Farther Along’ also captures more of the haunting spirit of the mountains, with the harmonies echoing beautifully. ‘What a Friend We Have in Jesus’ and ‘In the Garden’ are probably her best vocals performances on the album, even if the production lets them down a little.

She finishes on an upbeat, traditional country version of ‘When the Roll is Called Up Yonder’ like a collective celebratory hoedown to finish the service on a high note.

Dolly performed many of the songs from the album on a TV special with guests including Alison Krauss and Union Station, the Cox Family and her siblings. Overall I would conclude that this album, while enjoyable enough, doesn’t have any individual stand out songs and her best gospel work still remains ‘The Golden Streets of Glory’, ‘The Seeker’ and ‘He’s Alive’ where there’s something more distinctively Dolly about the delivery.

Albums like these do underscore how Dolly has cleverly sold herself as someone of faith, with pride in who she is and where she came from despite the fact she no longer attends church or belongs to any religion. When you constantly write (and rewrite) your own personal history, this remembered dream of the past becomes a truth in itself. What is sophisticated about Dolly’s marketing is that she can just as easily switch to use a different persona for a different crowd, crucially without losing or alienating the others.

Even for those who think religion’s all pie in the sky you would have to have a spirit of stone not to find some kind of musical comfort and joy in Precious Memories.

I am working on reviewing all of Dolly Parton’s solo albums in order. Here is a link to a list of the albums I have reviewed so far: https://highwayqueens.com/2021/03/03/dolly-partons-discography-album-reviews-list/

*Despite its terrible front cover I would highly recommend reading ‘Pilgrimage to Dollywood’ which explores some of the contradictions and complexities of Dolly’s appeal and sheds light on the relationship between loving American culture and experiencing its lived reality from a tourist perspective.