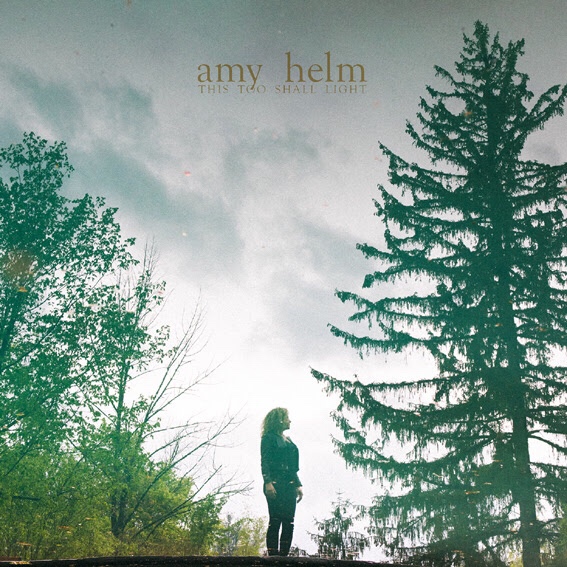 On the cover of her new album Amy Helm stands strong surrounded by the majesty of nature, the colour green, the cloudy sky and imminent light, suggesting this will be an album concerning the reality of the world around us. Musically the album is rooted in the rustic outdoor world where songs are sung to fight against approaching storms. With a varied mix of covers and originals This Too Shall Light offers a natural haven for the listener, a place of shelter, faith and community togetherness.

Opening track This Too Shall Light starts with a horn, a warning perhaps to pay attention, sit up and take notice of what’s going on around us. Baby be better / it’s a long way to the centre, is the opening line, followed by the central advice of the song: don’t let the darkness own you. As a singer her open and direct style immediately charms the listener, and the harmonious sound of her backing choir is a defining feature of the album. Together we will find the light. This song was written for her by Josh Kauffman and MC Taylor of Hiss Golden Messenger and there’s something similar in this song that was found in of the spirit of his album Hallelujah Anyhow. Soulful, uplifting and unifying.

Odetta was written by her producer, Joe Taylor and the combination of blues, soul, gospel and folk influences is beautifully realised on this song. Michigan shows she can dive deep into the darkness too. This is a song for a place and a person she has left behind. What am I supposed to do now, without you. The chorus of backing vocalists makes these songs sound like they are a collective expression of emotion.

Contemporary soul and blues is rarely allowed to be as rustic as ‘Freedom for the Stallion’, a plea to god for help to find the way in this mad world. The production lets the voices soar, inspired by The Staple Singers. The cover of Rod Stewart’s Mandolin Wind shows she can turn her sound towards something more a little more country. River of Love is another beautiful moment of contemplation about life and nature.

Heaven’s Holding Me is an achingly sad song about dying, and the only one written by Helm on the album (perhaps it would have been nice to hear more of her original material on the album). The cover of Long Daddy Green takes her into jazz-inspired territory and her voice more than holds up to such tests.

Two of the best songs on the album have connections to her father Levon. Amy’s version of The Stones I Throw by Levon and the Hawks has a soulful sixties sound, its words in favour of the Civil Rights Movement sounding as sadly relevant as ever. Final track is hymn Gloryland, which was taught to her by her father and a song he often sang to finish his sets. She ends the album singing to honour him, telling us of the comfort of faith and the promise of heaven.

Recorded live in LA over a few days with little preparation or retakes, This Too Shall Light is an album which feels organic and alive. There is a natural warmth to the delivery, like a crackling fire after a long winter walk with friends. Amy Helm has breathed her spirit into this mix of old and new songs and brought them to life. Throw those curtains wide and let the light in.

2 thoughts on “Album Review: Amy Helm – This Too Shall Light”