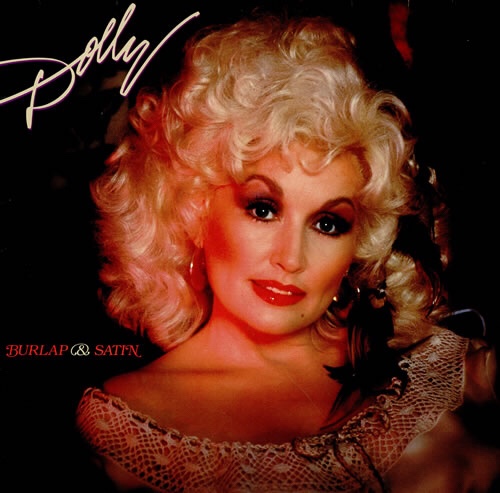 1983 was a year that brought Dolly more crossover chart success thanks to her duet Islands in the Stream with Kenny Rogers. Her 25th solo album released in the same year, Burlap and Satin, in comparison did not contain any real classic or memorable hit songs. The title is an acknowledgement that there will always be two contrasting aspects to her music – and how best to balance pop and country is something she is obviously still struggling to reconcile at this point. This album reached number 5 in the country charts, a disappointment for her, although it did result in a Grammy nomination.

The album begins with Ooo-eee which continues with the jazz pop style she experimented with on her last album Heartbreak Express, minus the country touches. Dolly sells the light material well and the song in itself is a bit of fun fluff, written by Annie McLoone. Dolly sets out her pop stall on that song, then tries to follow the satin with a nod to her burlap roots on country cover ‘Send Me The Pillow You Dream On’. The music is all bad 80s keyboards and cheesy vocal breathing and yet there is something kind of lovely about the dreamy vibe she creates.

Jealous Heart starts a three song run of Dolly’s own songs and this one is actually pretty good, even if the production just makes you crave a bare bones version. ‘A Gamble Either Way’ is a welcome return to her story songs, exploring the unfortunate fate of a young orphan who becomes a prostitute. This was intended to give backstory to her character in the film The Best Little Whorehouse in Texas, although it was never used in the film. Maybe it’s not the best melody she’s ever sung but the storytelling and lyrics are its strength. Similarly Appalachian Memories is a decent story song about a family looking back to their roots, with a good vocal performance. Unfortunately it goes so heavy on the dramatic keyboards that it becomes a little dreary (something which listening to Dolly should never be).

You’d think that any song which features Willie Nelson and Dolly Parton must be good but I Really Don’t Want To Know is not a classic performance from either star. The song itself isn’t particularly memorable and of course those damn eighties keyboards and strings ruin the whole thing.

The big single on this album, Potential New Boyfriend, might be a long way from the Opry but it’s hard to deny its catchy charm. Pop music is not Dolly’s natural home but sometimes there’s a song or two that works, even in a slightly guilty pleasure way, and this is one of them. And interestingly this was the first song with an official music video recorded by Dolly (the best thing I can say about it is that it’s of it’s time). When Dolly chases trends rather than going with her gut she rarely succeeds in rising above the most predictable pop fare but it’s sometimes fun to listen to her try.

A Cowboy’s Ways is another epic piano ballad sung with a Streisand level of melodrama. It’s the story of doomed romance and a girl who wishes she could change her ‘cowboy’ into a ‘poet’. It’s so ridiculously OTT that you can’t help but admire her gusto. I’d love to hear a genuine country version of this song in the Tammy style.

One of These Days is a bittersweet little love song, with some nice pedal steel in among the keyboards. It just kind of fades away at the end, and fades from memory equally as fast. Final song Calm on the Water is another of Dolly’s gospel songs and works hard (a little too hard) to lift us up as the album draws to a close.

Burlap and Satin is caught in such a time trap that it almost becomes unlistenable at times. Dolly’s problem is that in this era she often lets the satin suffocate the strength of her songwriting burlap. In retrospect this album isn’t a total disaster, especially in comparison with her next album, which would prove to be the nadir of her recording career.