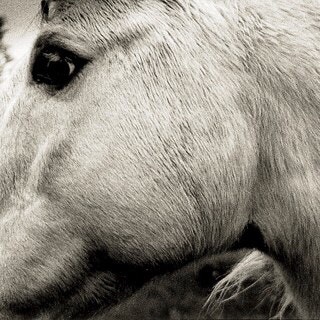 Songs and stories are passed down through history for multifarious reasons: to entertain us, to heal us, to warn us, to teach us how to live. Anais Mitchell’s musical Hadestown combined Greek myths and folk music in a way that showed how the past could speak directly to the modern world. Her new project Bonny Light Horseman offers traditional songs in a fresh but familiar way, wrapping the listener in a comfort blanket of melodic beauty.

Mitchell formed the band with multi-instrumentalist Josh Kaufman and Fruit Bats singer Eric D. Johnson, saying in a recent interview with the Scotsman that these songs gave her ‘a place to rest’. In folk songs you can free yourself from being the central focus of the narrative and channel someone else’s spirit into your music.

Folk music is not something I was brought up on and yet these songs on first listen felt like old friends to me, as though I’d heard them in another life. The production of this album allows the songs to breathe, whisper and echo creating a sparse and spellbinding effect throughout.

The band take their name from the opening song Bonny Light Horseman, a stripped back ode to a love lost overseas. The song laments how a force beyond your control can decide your fate, using the Napoleon Bonaparte refrain to underline how powerful men have historically destroyed the lives of the innocent. Times may change but such truths remain eternal.

The Roving is an eerie love song, a lament for the unravelling of a relationship. Mitchell’s voice has rarely sounded more bewitching – the music is a quietly hypnotic whirlpool of beauty. On Jane Jane and Blackwaterside the mix of voices brings something special to these old songs – they become strange and unsettling, yet sublime.

Bon Iver joins the group for the gorgeous Bright Morning Star and it’s just nice to hear him sing folk music again. Final song 10,000 Miles is so affecting and eerie, I wouldn’t be surprised to find the band in some ancient faded flea market photograph like they really were time travellers from another era.

Bonny Light Horseman have reincarnated these songs as one of the best indie folk albums I’ve heard in a long time. Everything old is new again.