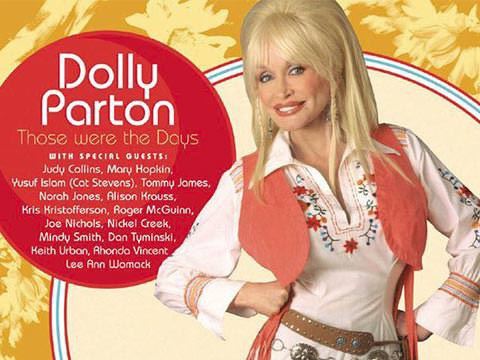 Released a couple of years after the abomination that is ‘For God and Country’ this was Dolly back on safer territory, with a cover album of country and pop songs from the 60s and 70s. The musical style was back to the bluegrass sound which had been so successful and features many guest artists including Norah Jones, Lee Ann Womack, Kris Kristofferson, Alison Krauss, and even the return of her old friend Mr Porter Wagoner.

‘Those Were the Days’ opens the album and gives it the name, bringing back Porter and the Opry gang for a fun little reunion. Looking back to the past is always comfortable and joyous territory for Dolly, and this song is no exception.

From there we have her taking on Dylan’s classic ‘Blowin in the Wind’ and while Dolly herself was never exactly a sixties, counterculture hippy she brings her Mother Earth spirit to the song. Nickel Creek’s accompaniment is lovely too. Dolly always does best when covering folk songs, so Dylan is a natural fit.

‘Where Have All the Flowers Gone’ is a delicate, feminine song written by Pete Seeger. She sings it with such fragile vulnerability, supported by Norah Jones and Lee Ann Womack. The song is a lament for all the young men lost in the war, using the flower metaphor to evoke the poignant tragedy of war.

‘The Twelfth of Never’ takes the tempo up, with Keith Urban supporting Dolly on this little love song. Her voice sounds fantastic here, making Urban sound pretty forgettable in comparison.

Dolly’s star power is on display on her cover of Cat Stevens’ ‘Where do the Children Play?’, as the man himself appears on the track. Aided by a choir, this one ends with Dolly doing her childlike singing voice.

The classic ‘Me and Bobby McGee’ brings in Kris Kristofferson to support her cover version. The song doesn’t exactly suit Dolly’s voice and she can’t quite sell the rebellious core of the song, even if the harmonica sounds brilliant.

‘Crimson and Clover’ is another song where the musicians really carry it. Dolly is stretching her voice and her style to fit some of these songs, with middling results on this sixties classic.

‘The Cruel War’ is a a traditional folk song, the kind of song that she sings so well. Here she takes on the role of a women who dreams of dressing up as a boy and joining the army so she doesn’t have to be left behind by her lover.

‘Turn, Turn, Turn’ shows that actually she might have been better just releasing an album of Pete Seeger songs (or Dylan for that matter). This one is particularly perfect considering her religious upbringing and spiritual leanings.

‘If I were a Carpenter’ is a proper country duet with Joe Nichols, their voices complementing each other nicely throughout. Both this one and her duet with Keith Urban were clearly an attempt to appeal to the contemporary country fans, showing Dolly was still ambitious to make an impact in the mainstream country genre.

‘Both Sides Now’ was originally intended to feature an appearance by Joni herself, but instead she collaborates with Judy Collins and Rhonda Vincent on a fast-paced bluegrass version of the song. Despite the breakneck speed she captures the melancholy beauty of the song perfectly.

Her version ‘Imagine’ finishes the album, bringing the peaceful theme of this record to a fitting close. Dolly’s arrangement is a little cheesy at times, but she does enough with her voice to make the song sound like her own.

The Paste magazine review of the album at the time called Dolly out for switching so quickly from her support of the war effort on her last album to advocating for peace on this one. While it is always possible that Dolly did just change her mind and wanted to reflect that, with hindsight it seems clear that Dolly is playing both sides, as she has done in many different ways across her career. Is that necessarily a bad thing? I don’t think so but I can see why some may see it as disingenuous.

Despite the tacky cover this is actually a nostalgic and sweet collection of cover songs, with some filler of course, but overall a much more enjoyable experience than her previous album.