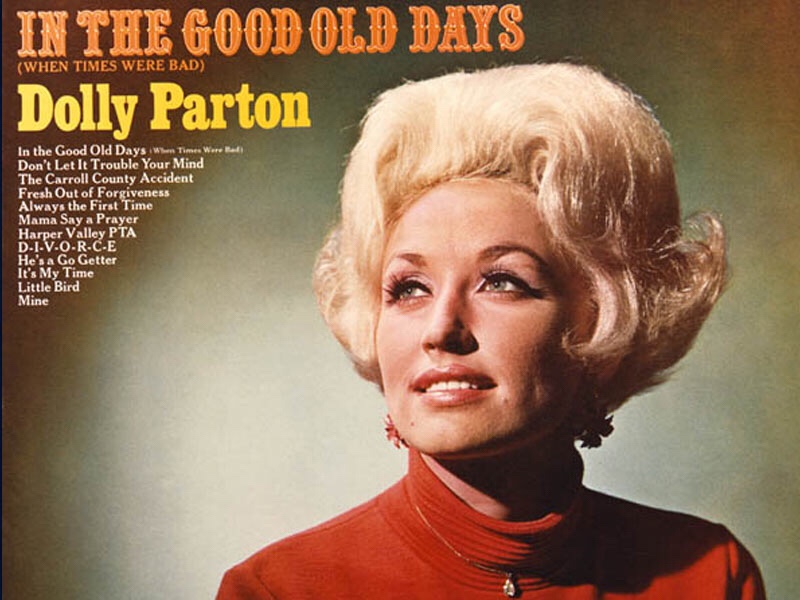 When Dolly joined Porter’s popular television show there was an inevitable backlash from the audience, who were used to hearing their favourite Norma Jean and stubbornly resistant to change. In order to increase her public popularity Porter masterminded a campaign to flood the market with as much music by Dolly Parton as possible. He would make her a star, come what may.

In the years 1968 and 1969 Dolly released three solo albums and featured on three duet albums with Porter. Even for someone of Dolly’s prodigious songwriting talent that’s spreading yourself extremely thin. On these six albums there are 22 original songs written by Dolly, not counting her multiple co-writes, which suggests there’s at least one classic album lost among all the filler.

In the Good Old Days (When Times Were Bad) was the first of two solo albums released in 1969, reaching number 15 on the country charts. Since their duet albums were regularly hitting the top ten at this point, Dolly’s solo work appears to be struggling somewhat in comparison. While production is again credited to Bob Ferguson, Porter himself was in charge of the sound, much to the eventual frustration of Dolly herself. This album features a few gems but it is padded out by recordings of popular country hits, which makes it by far her weakest early collection.

Despite that fact, the opening song Don’t Let it Trouble Your Mind deserves to be celebrated as one of her all time best songs. It’s about a dying relationship where a man thinks he’s ‘above’ the woman and hasn’t ended things because he thinks she ‘can’t take it’. Dolly has no time for such twisted relationships, singing ‘I’d rather live alone than live with someone who doesn’t love me.’ Her ‘I think I’ll make it’ is a sarcastic dig at the way the man has underestimated her strength of character. This song is sung with bittersweet wisdom. Rhiannon Giddens recorded a version for her debut solo record, saying ‘Dolly Parton has always been a hero of mine; not only did she not forget her roots and her people when she hit it big; she just happens to be an astute businesswoman and a damn fine songwriter. [Don’t Let It Trouble Your Mind] is greatly representative of her earlier work – the attitude is dripping from every word.’ Giddens’ excellent version goes some way to make up for the absence of this great song from streaming sites.

He’s A Go-Getter is another wry feminist anthem, mocking lazy and worthless men for relying on their wives’ wages. Dolly uses humour here to poke fun at the unfair way women were being exploited by good-for-nothing men. This one is a total blast and a great version also appears on A Real Live Dolly, the album of her homecoming concert which was released in 1970. In the intro to the song she says it was inspired by some of the men she saw hanging about in her own hometown.

In The Good Old Days (When Times Were Bad) is the stand out song on this album, and Dolly later re-recorded it for My Tennessee Mountain Home. This song is about the trials and tribulations of her country upbringing – a stark and realistic recollection of hard times. Dolly includes her trademark humour in the song and its title. She may be proud of where she is from, but there will be nostalgic sentimentalising her childhood here.

On It’s My Time Dolly sings of suffering and asks for support from childhood friends, those people in her life who she knows and trusts the most. Her heartbreak is unspecified but whatever pain she is going through she is seeking kindness. This song was written and originally recorded by John Loudermilk, whose talent earned him a place in the Songwriters’ Hall of Fame. The longing for comfort from your past clearly appealed to Dolly’s own sensitive heart but this is the first of a few forgettable covers featured on the record.

The next song is a version of the classic hit Harper Valley PTA, written by Tom T. Hall and made famous by Jeannie C. Riley. The original is one of the most significant country music hits of all time – being the first song by a woman to top both the country and Billboard charts at the same time (it is nicely fitting that the second woman to achieve this feat was Dolly herself with 9 to 5 in 1980). You know why this song would appeal to Dolly, since it’s the story of a sassy single mother who stands up for herself in the face of small town hypocrites. Versions of the song were recorded by most of the women in country at the time including Loretta Lynn, Norma Jean, Lynn Anderson and Dottie West showing the strength of its central ‘sock it to the man’ message. The story of the song itself has been well documented and you can find out more about it by listening to the three dedicated episodes on the podcast Cocaine & Rhinestones.

Little Bird is a sweet ode, almost like a children’s song in its style and simplicity. Here Dolly appreciates nature and all the beauty in the world. She would return to the bird metaphor with her Little Sparrow bluegrass album much later in her career. The next song is another solo original called Mine – a heartbreaking story of shattered romantic dreams and the pain of what could have been. She sings with sadness about the broken promises a man made her and how she has to watch him marry and have children with someone else – living the life she thought would be hers. This is a great song but it’s hard not to think Tammy would have delivered it with a more memorable sense of melodrama.

The Carroll County Accident was written by Bob Ferguson and became one of Porter’s signature songs, a story of small town drama where a car accident is the only exciting thing ever to happen. It echoes Ode to Billie Joe both in its simple style and no-chorus structure. The song is about covering up the fact that the car crash victims were having a secret affair. It’s a perfectly passable version but not a natural fit for Dolly and perhaps only chosen as a way to reinforce her connection to Porter.

Fresh Out of Forgiveness is the one song on here written by her uncle, Bill Owens, who had a larger share of the songwriting duties on her first two albums. Porter never liked this song but maybe there was some power play going on in terms of what man had the most control of Dolly’s career. I would have to agree with Porter that it’s not her best vocal performance, being a soul song with a gospel arrangement it doesn’t naturally suit Dolly’s vibrato voice.

When you reach a Dolly original song you can easily identify it due to the distinctive way she writes. On Mama Say A Prayer she begs her mother for faith and strength so she is not led into temptation and evil. This song could be interpreted as concerning the dangers of prostitution and it echoes the ‘country girl struggles to cope with the city’ theme of False Eyelashes and I’ve Lived My Life.

Always the First Time is a clever little ballad where a woman threatens to turn the tables on a cheating man (there’s a nice live version up on YouTube). The lyrics are biting and baiting – declaring that despite her good girl image she’s more than happy to unleash some hell if her man doesn’t shape up. Songwriter Joyce McCord was the sister of singer Sharon Higgins, who herself wrote songs for Loretta Lynn and Wynonna Judd. Their brother Damon Black was a close friend of Porter Wagoner, which may have been how Joyce’s song was brought to Dolly’s attention. Joyce also wrote the excellent song Sorrow Overtakes the Wine which has been recorded by Porter, Mel Tillis and others but she appears to have left her songwriting career behind in order to raise a family, fading into obscurity before her death in 2006.

The album finishes with a cover of DIVORCE, an ambitious choice since who could ever hope to emulate Tammy’s heart-wrenching version? Certainly it would be unheard of now for a singer to record a cover of a song only a year after it had been a major hit, but in the sixties this was done regularly. In fact the Bacharach/David songs were routinely covered by multiple artists and many other soul songs were too. However it certainly wasn’t common in country music for a cover to surpass the success of an original but many singers still recorded the same songs anyway, perhaps to appeal to a wider range of fans. Another reason for this song’s inclusion may have been because it was cowritten by Curly Putman who had contributed a song to both of Dolly’s previous albums. However in the end it is a forgettable version and proves again that Dolly’s strength is in her original songwriting rather than interpreting other people’s material.

In The Good Old Days (When Times Were Bad) is one of the few early albums not currently available to buy or stream, which may be an anomaly rather than any comment on its worth (it is thankfully uploaded to YouTube). Overall despite some interesting songs you can’t help but feel frustration listening now, as you just wish some of the better material could have been combined with My Blue Ridge Mountain Boy to make one high quality 1969 release.