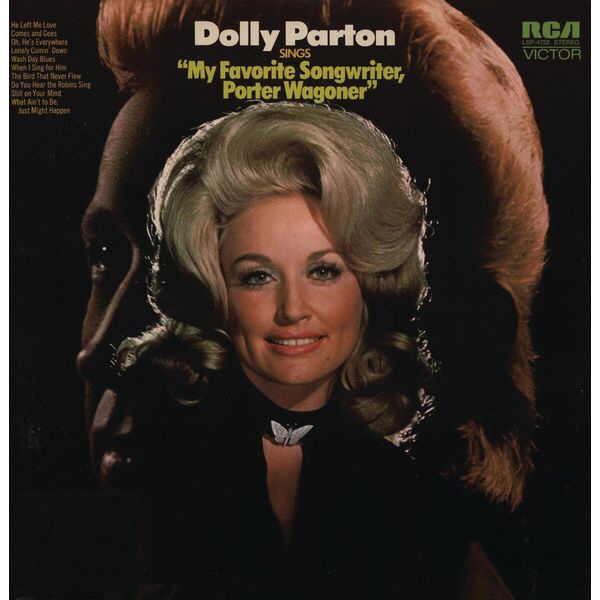 Dolly’s tenth studio album released in 1972 was a tribute to her boss and mentor Porter Wagoner, who had also been acting as her uncredited producer and manager since she joined The Porter Wagoner Show in 1967. Dolly’s reasons for recording songs by Porter were outlined in the album notes: ‘Porter has performed many of the songs I have written since I have been associated with him, and it is a great pleasure for me to be able to do this album of his songs.’ My Favourite Songwriter, Porter Wagoner was Dolly’s way of honouring the man who had supported her songwriting and helped shape her career in so many ways.

In fact Dolly said these songs were ‘some of the greatest songs I have ever sung’, showing her admiration for Porter’s work. By the late sixties Porter had stopped writing due to his hectic television and touring schedule, and Dolly’s support had renewed his enthusiasm for composing and recording original songs. Dolly and Porter were a duo who truly had mutual respect for each other’s talent.

However trouble was on the horizon. By 1972 Dolly had done her promised five years on the show and things were becoming increasingly difficult. Dolly admitted recently that Porter was ‘very much a male chauvinist pig.’ He was in charge and Dolly worked for him, which he never let her forget. This album does on the surface look like deference to his patriarchal control. Notably the cover has Porter’s giant shadowy presence ominously hovering behind Dolly’s smiling portrait, suggesting he is the mastermind behind her career. Retrospectively, however, we can conclude that perhaps Dolly wanted to acknowledge her debt to Porter and sweeten him up for her forthcoming exit from the show. Or at least stroke his damaged ego now the student was increasingly becoming the master.

So do Porter’s songs really deserve Dolly’s appreciation and attention in this way? The album opens with Lonely Comin’ Down a wave of classic country heartbreak, which is the best song on the album by miles. As it builds the song becomes a soulful outpouring of sadness and pain. The same version of this song was also included on the 1974 album Jolene, suggesting it was a favourite of Dolly’s.

Do You Hear The Robins Sing is an upbeat ode to nature, with some great steel guitar played by Pete Drake. This song celebrates simple country living over the artificial modern world. It fits well with Dolly’s previous work, promoting the joys of the country over the dark and unfriendly city.

What Ain’t To Be Might Just Happen is an upbeat and catchy positive slice of country pop. A little bit throwaway really, but its simple message reflects Dolly’s positive thinking trademark style of recent years.

A real curio on the album is the spoken word track The Bird That Never Flew, which sounds more like a sermon than a country song. Wagoner’s gospel and religious songs were often intriguing and this one is a sensitive tribute to the unfortunate souls among us. Basically Porter finds a bird who can’t fly and this is used as a metaphor for how if you have faith God will help you find your wings. It sounds hokey but there is a strange magic to the story of the song which Dolly really sells.

The final song on side A is Comes and Goes, another classic country moment of melancholia. The narrator is thinking of a lost love, but she is struggling to keep his memory in her mind.

The second side starts with Washday Blues, the only single from the album, which reached number 20 in the country charts. It is a real slice of country kitsch and the cheesy backing vocals make it sound a little cartoonish. The song is a humorous slice of reality about the domestic drudgery women face and even though it is written by a man it is pretty spot on in those respects. Dolly is obviously having fun with it too, which just about saves it.

When I Sing For Him is another gospel song, although there’s a double meaning to it, as really Dolly acknowledges a higher power who brings her happiness. She’s acknowledging the joy she gets when she sings gospel music and how it strengthens her connection to god. Maybe singing it for Porter was intended to do the same.

The next two songs on the album are similar in theme and title – concerning lost love and memory. On the oddly upbeat He Left Me Love the narrator doesn’t search for new love since it is so strong it lives on in her memories. Oh He’s Everywhere is a real country weepie with lovely pedal steel and fiddle. Here the narrator is haunted by the memory of her lost love, even in ‘total darkness’ she sees his face.

Still On Your Mind is a soulful gospel song about a woman who loves someone who loves someone else. There’s another on his mind and she knows she will always be second best. Much like on Jolene, Dolly is the vulnerable victim.

There are two extra songs on the 2010 digital reissue – a new opening song Everything’s Beautiful In Its Own Way, a lovely ballad about looking at the world and appreciating god’s gifts. The additional final song Just As Good As Gone is another moment of melancholia where a lover looks at their sleeping partner and contemplates what went wrong. Both these songs are stronger than some of the other tracks on the original release and therefore are a welcome and worthy addition to this album.

Overall there are some interesting songs on this record and Wagoner certainly had talent for the classic country weepie and thoughtful gospel music. However you have to conclude that the album just serves to prove how superior Dolly is in terms of songwriting skill. The album itself only reached number 33, maybe showing that Porter’s style was also fading out of fashion.

My Favourite Songwriter, Porter Wagoner signalled the beginning of the end of their professional relationship. In 1973 Dolly would write and record I Will Always Love You, her farewell song for Porter and leave the show not long after. The genuine love and connection between the two artists, which can be heard clearly throughout this album, would soon be put to the test.

In 2018 I started my project to listen and review every Dolly Parton album in order of release. Please click the links below to read the posts so far: