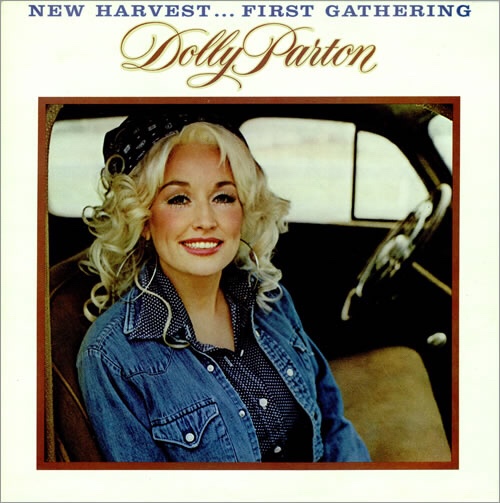 The title and the relaxed styling of Dolly’s hair and clothes on the cover of this album tells us immediately that something is different. Dolly may have written her goodbye song in 1974 but it wasn’t until this 1977 album New Harvest…First Gathering that she was finally free from Porter Wagoner’s involvement in her music and career. She produced the album herself and embraced the opportunity to push herself in a brand new musical direction. This album then also became her escape from the confines of country music itself. Dolly’s ambitions were to find a way into the mainstream, into the movies, into the ears of all music listeners. There was simply no way Porter, or country music itself, could contain her. And hey, when a horse wants to run there ain’t no point in closing the gates.

Opening with the defiant anthem ‘Light of a Clear Blue Morning’ we hear the mixture of joy and relief in her voice. Freedom begins here. I was like a captured eagle, she sings almost sounding dazed at how she ever allowed herself to be caged. Dolly offers others trapped in similar destructive relationships some comfort. I can see the light of a brand new day. She hasn’t reached her happy future yet but she knows she will get there. By the end of the song her euphoria is reflected in the foot stomping frenzy of the music. Dolly sells the drama of the song with one of the best vocal performances of her career. This was Dolly’s favourite song on the album because ‘it means the most.’ And it really soars.

Applejack is the story of a beloved banjo man from her hometown and a tribute to all those musicians who inspired her career. You can hear the voices in the background of some of the legends of the genre – Kitty Wells, Minnie Pearl, Chet Atkins, Roy Acuff and Johnny Pearl. It’s one of the catchiest songs in her repertoire, with an infectious bluegrass chorus that is impossible to resist. In terms of this album it is the only real ‘country’ song and while it is pretty simple and borders on gimmicky, Dolly was hugely proud of the song and how it honoured her country music inspirations.

Sickly sweet ‘My Girl (My Love)’ is a cover of the great Motown song, slowed down to the point where listening is like walking though treacle. Crossing over to the mainstream unfortunately did result in some songs like this which are stripped of what makes Dolly unique – her songwriting and her personality. There is a sense with this one that she’s aiming for the seventies lounge act circuit or a glitzy Las Vegas hotel. It is the only real misstep on the album.

Holdin’ On To You is more successful in terms of its pop crossover appeal. Dolly sounds more comfortable on a song with a little more tempo and one she wrote herself. Freeing herself from the traditional country roots gives her a chance to experiment with styles that would eventually perfectly converge in 9 to 5.

The seventies ballad You Are is inspired more by pop and soul acts of the time and is enjoyable enough, showcasing Dolly’s vocal range. It’s a simple love song, with nothing distinctively Dolly in the lyrics. I love you just the way you are, is a long way from some of her biting take downs of the past. And yet there is something classic in the songwriting which is hard to deny. Maybe this album is a sell out to some extent but you can’t blame her for the attempt at expanding her sound. She had written so many perfect country songs by this point there was almost nowhere else for her to go.

The second half of the album begins with How Does It Feel, another progressive sounding pop song. Dolly is able to write these with seeming ease. Perhaps they are not all instantly memorable, and many have been forgotten over time, but they are enjoyable enough to listen to.

Where Beauty Lives in Memory has an almost spoken word opening, and the music is lush and orchestral, almost a little musical theatre. They say she was the Fairest of them all, Dolly sings of the main character – a kind of Miss Havisham madwoman who has waited for forty years for the man who abandoned her. The song ends with her falling dead on the floor in a typically dramatic Dolly flourish. It’s probably the most interesting song on here in terms of the narrative and delivery.

Your Love Keeps Lifting Me Higher got Dolly another Grammy nomination – she had surprisingly failed to win any Grammy Awards up to this point and would not do so until 1979. This song is a mix of gospel, pop, country and soul music which feels distinctively Dolly. The genre purists may not have liked it then but she didn’t write it for them.

Getting in My Way is another catchy pop number. Dolly is back on her usual theme of memory and how she can’t escape her lost love. The upbeat music is a contrast to her miserable, messed up emotions. Her delivery is loose and feels natural, accompanied by some rockier guitars and percussion.

Final track ‘There’ has that Stairway to Heaven style guitar again that she used in We Used To and some oddly childish sounding vocals (which would appear again when we meet Little Andy in her next album). The song is a religious one in theme, and ends the album in a crescendo of joy and ‘hallelujahs’.

A bombastic mix of contemporary pop, country, gospel and soul the album was a success – it topped the U.S. Billboard Top Country Charts becoming her first No. 1 album and reached No. 71 on the U.S. Billboard 200. There were no huge hits on the record – those were yet to come, but on this album Dolly had begun to lay the groundwork for her biggest pop songs and her eventual worldwide superstardom.