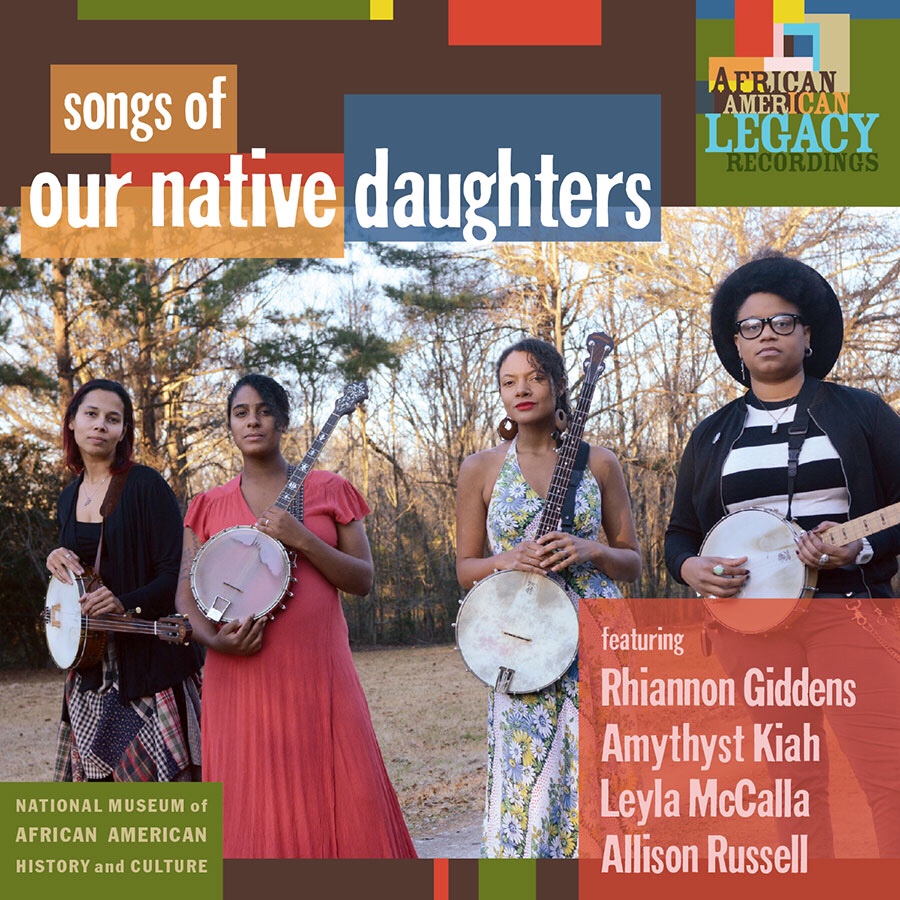 In his introduction to ‘Notes on A Native Son’ James Baldwin declared, ‘I am what time, circumstance, history, have made of me, certainly, but I am, also, much more than that. So are we all.’ Inspired by his work, Rhiannon Giddens initially brought together this group of musicians in order to try to reclaim the black female history of America. Once the project began she realised that it had become much more than just about telling the stories of the past; it became an expression of creative freedom conveying hope for the future too.

Giddens, with her collaborators Amythyst Kiah, Leyla McCalla and Allison Russell wrote and recorded these songs together at producer Dirk Powell’s studio in Louisiana (Kaia Kater was also invited but unable to attend due to scheduling). Mixing originals with songs inspired by historic folk music and stories the result is an astonishingly powerful, and listenable, piece of art.

On ‘Black Myself’ Amythyst Kiah embraces and celebrates her identity, despite the difficulties of a racist and judgemental society. I stand proud and free/Cause I’m black myself /I can go anywhere that I want to go. The confident vocal delivery feels as much influenced by modern hip hop as the blues. Despite her defiant tone there is a troubling truth in the fact that black women still have to sing protest songs like this. It’s a signal, to anyone blind to our current reality, that there’s still work to do.

Moon Meets the Sun is a celebration of music in the face of crippling oppression. Devastating words are sung to a gloriously uplifting melody. You steal our children, you make us hate our very skin, but we’re dancing. Despite everything these women endured. The caged birds stood on the grave of dreams and they sang.

The uplifting tone of that song is in stark contrast to the next track, Barbados. Giddens reads a satirical poem by abolitionist William Cowper, followed by a lament for the slaves it concerns. She finishes the songs with a modern version of the poem, making connections with factory workers, miners and others still oppressed by our current capitalist system of greed. When she breaks the fourth wall by addressing those ‘listening on your favourite device’ you can’t help but shudder with shame at how we are all indeed ‘complicit’.

And maybe songs like these will be a difficult listen for some people – but that’s how it should be. We need to look our history in the eye and really pay attention. We can’t look away. On ‘Quasheba, Quasheba’ Allison Russell addresses her own family history, telling the story of her slave ancestor. You kept the dream of hope alive. Every song on the album conveys a similar optimism gathered from the strength of these women and their survival stories.

I carry my scars, sings Leyla McCalla on ‘I Knew I Could Fly’ – a tribute to blueswoman Etta Baker. The scars of what happened to women in history inspire these songs but they ‘won’t live in fear’. The battle may be only ‘half won’ but there is no surrender, no defeat. Later song Lavi Difisil has McCalla singing in a mixture of English and her native language, as she also did on her excellent recent album The Capitalist Blues, acknowledging the diversity within the heritage of black women too.

Pollyann’s Hammer takes an old folk standard and reimagines it from the point of view of the female character. This came from an idea of Giddens, but Kiah’s voice gives the story of a woman doing men’s work a realistically rough edge.

Mama’s Cryin’ Long is the heart of the album, a song Giddens had written prior to the project. It tells the story of a slave raped and murdered, from the perspective of her child. The senseless violence and horror of history is exposed in a brutal and harrowing way. It’s hard to listen to a song as bleak as this without screaming in despair. Blood and Bones and Slave Driver also concern the horrifying reality of slavery, telling the stories of women who were stolen and brutalised. History must be heard and reckoned with, no matter how agonising it is.

Better Get Yir Learning is another dagger to the past from Giddens. She reimagines a minstrel song, changing the originally offensive lyrics to make it a protest song about slavery and education. By reclaiming these tunes, and the minstrel banjo playing style, she takes back ownership of music that was exploited by white people at the expense of those who created it.

Those forgotten people are called back down to earth on Music and Joy. This tribute to their ancestors is as light a song as the title suggests, a reminder that the ones who came before never stopped singing. Music was one of the few ways that black women could gain power and freedom in the past, even if many of their legacies have been since overlooked. The closer You’re Not Alone is sung by Allison Russell to her daughter, a comforting lullaby reminding us that music and love will always endure.

Our Native Daughters carry history’s forgotten voices in their hearts and they honour them with pride. Listen and learn. Watch them dance. Today is their turn.