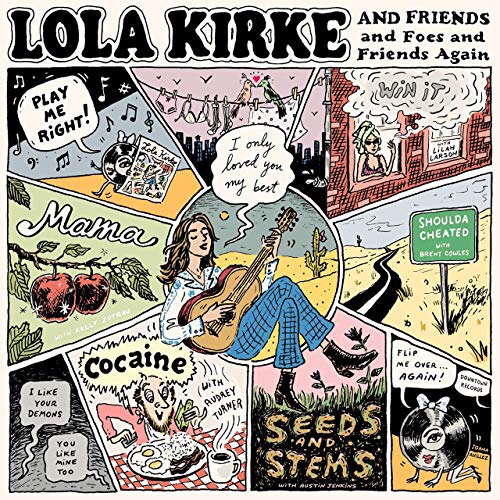 I really loved Lola Kirke’s album Heart Head West, a real underrated gem which mixed some lovely Laurel Canyon inspired sounds with country music influences. Her new EP Friends and Foes and Friends Again builds on that promise and she delivers five songs of simple beauty that sound like a blast of fresh air.

Each song is a collaboration with artists that mainly come from alternative music rather than the altcountry genre she is embracing on these songs, for example the first guest is Kelly Zutrau from Wet. Their song Mama is a beautiful exploration of the ever complex relationship between mothers and daughters. Kirke’s voice really shimmers alongside the steel guitar and airy production.

Win It is a brilliant love song, a duet which features Lilah Larson from the band Sons of an Illustrious Father. Even though Kirke is using many of the old country music sounds, the delivery of a queer love song like this undercuts any of the usual genre cliches. Kirke seems to understand country music’s humour too, on the wonderful Shoulda Cheated featuring Brent Cowles.

The final two songs are covers, both about drugs. Seeds and Stems is a moment of sadness and sorrow for a lost relationship. The blues song Cocaine is sung with her old friend Audrey Turner, whom she was in a band with in college. While the songs themselves are familiar it’s nice to hear a woman sing them for a change.

This EP just radiates personality and fun throughout, and the collaborations make the whole thing sound like you’ve stumbled into a bar where a group of friends are playing live on stage. Pull up a stool, order yourself a drink and enjoy.