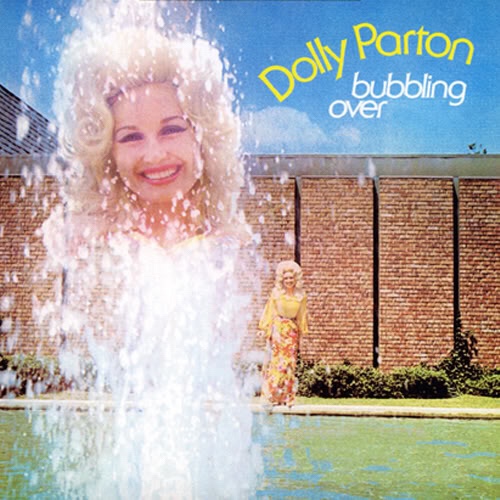 On her 1973 album Bubbling Over we find Dolly changing direction again, moving away from the deeply personal, autobiographical songs of My Tennessee Mountain Home. This lighter album feels like another step towards finding the sound that would eventually help her make the breakthrough beyond the country charts. The cover image is memorably kitsch with Dolly’s grinning face emerging from a fountain, taken by Les Leverett near the Country Music Hall of Fame.

Title track Bubbling Over is a joyful burst of country pop. The lyrics are pure froth, a simple love song of the type which were generally absent from her career up to this point. It sounds like a hit, and even if it wasn’t released as a single she did perform it often. In fact, as the YouTube footage confirms, she actually sang this as her opening number on her solo TV show in the 80s. You can see instantly how she embraces this more dazzling, showbiz glitzy version of herself and the song rises to the occasion.

The only actual track which was released as a single at the time was a re-recorded version of Traveling Man, originally released on the Coat of Many Colors album. This song is a hilarious little number about loving an older man and being double crossed by your own mother. Maybe Dolly was just in a playful mood and wanted this one as a single or perhaps it had been a success live so re-releasing it made sense commercially. Anyway it is a tongue in cheek classic worthy of any Dolly album.

Next song Alabama Sundown has a beefed-up full-band sound and her voice has rarely sounding as strong or commercial. Sonically this is a real move away from the country folk of My Tennessee Mountain Home. Of course thematically it covers familiar ground – the narrator is in New York, dreaming of Alabama. This track is the only one written by songwriters outside of Dolly’s usual circle – Dave Kirby was a session musician and songwriter who had written hits for Charley Pride and Tammy Wynette. His co-writer on the track was Danny Morrison who also wrote for George Jones and Kenny Rogers. As her career progresses towards the 80s Dolly begins to record more and more of other people’s songs but at this point in the seventies it was quite unusual.

The only songwriter she had really relied on for the past few albums was Porter Wagoner and Dolly again records one of his songs, the oddity Afraid to Live and Afraid of Dying. With lyrics like ‘They say most anything you eat could hurt your health / Be careful what you drink, don’t harm yourself’ it might have been written as a criticism of the modern wellness era. When she sings, ‘We can’t enjoy life when they say each thing might bring an early grave’ you do have to laugh and nod your head a little. As many of Porter’s songs it is faith which is conveyed in the underlying message of the song, as the lyrics suggest we should worry more about God than things like air pollution. The dismissive tone of environmental scepticism certainly feels more than a little of its time.

Love With Me is a pretty little folky number, with familiar melodic echoes. There are some beautiful lyrics on this one like when she sings ‘We’ll say with our hearts what no poet could capture / say with our eyes what no artist could paint’. It’s a moment of sweetness and beauty to finish side A.

My Kind of Man is another song which defines Dolly’s version of feminism. She won’t change herself for any man. ‘if I’m not your kind of woman being just the way I am / then I know you’re really not my kind of man.’ She declares ‘ I can only be myself’ and she won’t stay in a relationship when she’s not valued for who she is. It’s straight talking country music and shows her confidence to convey to women that it’s okay to leave someone who doesn’t get you.

Then we have the return of her uncle Bill Owens as songwriter, with the lovely weepie ‘Sometimes An Old Memory Gets in My Eye’. It’s a nice song for sure but it does feel like a backward glance to her old sixties style. The earlier songs on this album felt like she was trying out a new more commercial direction so these type of songs seem like safe options.

Pleasant As May is another folky sway of nostalgia, imagining a better life with her love ‘picking flowers to braid in my hair’, listening to the sound of songbirds. Her bliss soon dims. When the seasons changed she didn’t feel it because of her love. Now though ‘forever heartbroken I’ll be.’ Such a beautiful little song would eventually be recorded by Dolly, Emmylou and Linda for their Trio sessions – and you can feel that old worldly pastoral bluegrass version emerging here.

The Beginning is the story of a couple who fall in and out of love before being brought back together by the birth of their child. Dolly gives this story a happy ending, unlike some of her more haunting sixties songs like The Bridge & Down From Dover. Maybe its a sign of her moving increasingly towards simpler, more sentimental songs. Still it would take a hard heart not to be moved by Dolly’s poignant delivery. Final track Love, You’re So Beautiful Tonight was written by Porter and really it is a nice one to finish on, summing up the core message of Dolly’s positive outlook on love and life.

For an album that doesn’t appear on streaming sites in the U.K. this is a surprising little gem (you can hear it on YouTube). It has a nice mix of pop songs, weepies and folk ballads which may be simple and somewhat lightweight but they are always lovely to listen to.

Of course this album was the calm before the storm for Dolly, reaching only number 14 on the charts. Next she would release the defining album of her career, Jolene, which would catapult her to new heights of commercial success.